Review: Inside Out by Jack Kearney 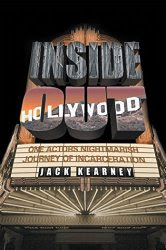 As an actor, Danny Belson has played many criminal types—he has “that look.” When he falls foul of the law, he finds himself locked up in the same prison where only six months ago he taught an acting workshop. Danny's life is turned Inside Out.

“As a struggling actor, the author appeared on such shows as Mash, WKRP in Cincinnati, and General Hospital. Back in the mid-seventies he graduated from the prestigious American Academy of Dramatic Arts and had an opportunity to teach an experimental acting workshop to inmates at a Federal prison.”

The first part of this story revolves around Danny’s life as a struggling actor. The auditions, the casting agents, the parties, and the networking were fascinating to me. Clearly the author has firsthand knowledge of the situations he puts his main character in and the realism came across loud and clear and made for a compelling read.

The second part of the story focuses on Danny’s life after he’s incarcerated. This, for me, was less enjoyable. Partly because of the writing quality—too many characters, and a point of view that slipped around enough to cause confusion—and partly because the plot became so chaotic at times I was pulled out of the story.

I understand this is the author’s first novel, and taking that into account, it’s a solid piece with an unusual storyline.

I’ve definitely seen worse, but the number of silly typos got a bit irksome.
English spelling.