This is the second half of a doubleshot review. For BigAl's take on the same book, look at the post from this morning. 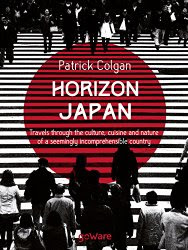 A diary of travel through Japan.

As a thirty-year resident of Japan, I found Patrick Colgan's diary of his travels in the country in parts entertaining and off putting. His depiction of Tokyo as a living organism fed by arteries of train lines is an evocative description of the city. However, there is far too much "WOW" throughout the book even for a casual reader or visitor.

"This streamlined metal box that when arriving at a station seems always on the verge of rising up, detaching from the track and transforming itself into a giant robot, is able to cancel space and make distances imperceptible."

He's talking about the Shinkansen bullet train. When Japan first developed high-speed rail it was a technological wonder. Today, France's TGV operates across Europe, including the author's native Italy, and it rivals JR Central in bids for foreign construction contracts. Colgan also calls the Shinkansen the pride of Japan Railways. There is no Japan Railways. It was broken up and privatized years ago.

He devotes a long section to food, but curiously restricts his comments to ramen and a food critic's favorite restaurant, which apparently is a Chinese fast food joint. Colgan's point that Japanese are meticulous in preparation of even mundane fare is well taken. However, he shortchanges the reader. Tokyo has more Michelin-starred restaurants than any other city in the world, and they represent globe-spanning ethnicities.

There is this befuddling line:

"The queues, sometimes as long as 100 metres, can be seen stretching around Omotesando or Ginza at lunch time…"

Really? I have seen lines as long as maybe twenty meters.

This passage is simply wrong.

"…property development, which reached its climax with the speculation bubble of the eighties that left ruins behind it. I say 'ruins' just as a manner of speaking, as the ugly buildings with an average age of 25 or 30 years are all still standing, silent witnesses of that spell of unreasonable optimism and presumption."

Development took off after prices dropped at the collapse of the asset bubble in 1990. Tokyo has been transformed over the past decade or two with, to my eye, wonderfully creative architecture from Shiodome, to Roppongi Hills, to even the hokey Venus Fort in Odaiba.

"What happened after the nineties is remembered as 'the lost decade' but maybe the period should be called the lost twenty, or thirty years. The country, the people - the numbers are saying it, and so is the present prime minister Abe’s extreme economic policy — haven’t yet recovered."

The so-called three arrows of "Abenomics," fiscal stimulus, monetary easing and structural reforms have largely been successful. Goldman Sachs Vice Chairwoman Kathy Matsui notes Japan has been the best performing major stock market since 2013, and she expects further advance in 2016 with double-digit growth in earnings. The Bank of Japan's adoption of quantitative easing, that is monetization of debt, was considered radical at the time, but it wasn't long before it was adopted by the Federal Reserve, which is now abandoning the practice. Japan's GDP growth has trailed that of the U.S. and E.U., but its unemployment rate of 3.6 percent compares with 6.2 percent for the U.S. and double digits in much of the E.U., according to the CIA World Factbook.

Many of Colgan's attempts at picturesque imagery struck me as tortured.

"…there is also a big glass-and-cement box. It’s grey, but it has azure stripes running through its facade reflecting the sky. It is suspended six, seven metres above ground. I already know what it contains, because it’s the third time that I have come, and maybe this is the reason I can’t stop looking at it."

He is describing the Hiroshima Peace Memorial Museum, which is built on pillars.
In a hiking trip in Hokkaido, the author has this to say about bears:

"The Asian black bear living in these valleys is no grizzly, but can be up to two and a half metres tall when standing, and if it has cubs with it, it can become aggressive: it’s their nature."

There is no mention of brown bears.

Although they are dangerous animals, Japan's black bears, tsukinowaguma, don't get nearly that big. Hokkaido's brown bears, higuma, do stand that tall, and they are, in fact, related to grizzlies. I don't see how one can write about a bear-watching trip in Hokkaido without noting the two species.

To me the most interesting passages described trips to islands south of Okinawa, but perhaps that's because I haven't been there.

Except for a two-year stint as a communications specialist at McKinsey & Co., my time in Japan has been spent as a financial journalist for Bloomberg and before that Nikkei. I am now retired and live in Yokohama.


First of all, I have to thank you for taking the time to read and review my book. Sometimes you learn more from criticism than praise and I did learn from both reviews.

I won't address all the points in mr. Waite's review as I don't want this comment to become extremely long. And I want to stress that I respect mr. Waite's wide experience and knowledge of the subject, clearly much wider than mine. I would just like to clarify some points.

I will also admit straight away that he got me on a factual error:
obviously the reference to the black bear is a mistake, and I meant the brown bear. I will correct it straight away and I thank you for pointing it out.

As for the other points:

-Describing Tokyo as a wasteland or a desert is obviously a very personal view as the city has some extraordinary architecture among, I believe, a vast majority of shabby, unappealing or simply ugly buildings, many of them built in the eighties (and earlier).

The ugliness of Japanese cities, including large parts of Tokyo, is an aspect often remarked upon by European travellers, probably influenced by the fact that they often come from cities with a very coherent architecture (such as Fosco Maraini in his classic 'Meeting Japan'). It could be my background that lead me to insist on this point.
I wasn't a witness like mr. Waite of what happened during the late eighties. What I wrote was mostly based on research and talks with Tokyo residents.

I will quote two of the books I have read and that I used for my research.

In 'Tokyo Underworld' Robert Whiting for instance writes
"The bubble economy of the Eighties, with its sudden jump in real estate prices, just made things worse, for it gave rise to a new mob activity called jiage, the business of persuading recalcitrant owners to sell property so that the mob could consolidate it and sell it for the construction of million-dollar office blocks"

Francesco Gatti in his History of Contemporary Japan (published in Italian, this quote translated by me) writes
"The dramatic increase in the price and the pressure of demand for housing encouraged the whole (construction) sector, dominated by six business giants. These, during the eighties and nineties, also benefited massive investments by the industry public, responsible for extensive overbuilding in both major urban centers and rural areas "

-The Shinkansen. I believe it's still a train very different from any other I have seen and it can't be compared with the Tgv or the Eurostar but rather to its Chinese counterparts, in my opinion. It still surprises foreign travellers for its unique looks, its reliability, its speed, and I might add its boarding process.

-I didn't mean to write an essay on Japan and this is why I decided to focus on some aspects that I found more revealing than others. Humble ramen for instance rather than the well known abundance of starred restaurants in Tokyo which aren't accessible to the typical traveller and weren't accessible to me.

-As for the queues I might have been wrong by ten or fifteen metres as I didn't actually measure them, but I guarantee that I did witness extremely long queues in Omotesando, in particular for a popcorn shop (it moved faster than the typical restaurant queue).

I didn't take pictures or don't have any proof of it. But I did found some on the Internet. Obviously queues like these are exceptional but do form, sometimes
http://www.japantoday.com/category/picture-of-the-day/view/popcorn-line

But if some of these points weren't clear or well substantiated in the book, it was all my fault.

thank you again and best regards!

p.s. i deleted and reposted the comment just to correct a few typos as there wasn't any opition to edit it