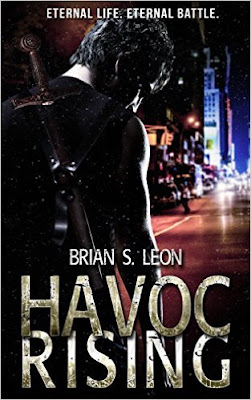 Description:
“Steve—Diomedes Tydides to his Trojan War buddies—just had a bad day on his charter fishing boat in San Diego, but when the goddess Athena calls on her faithful warrior for another secret mission, he’s ready. The bomb that exploded inside the Metropolitan Museum of Art isn’t the crime American authorities’ think it is. Someone also stole the Cup of Jamshid, and Diomedes knows its fortune-telling abilities won’t be used for anything benign.

Though Diomedes recovers the Cup from a determined shaman holed up beneath Central Park, when he finds his allies slain and the Cup taken once more, he knows he’s up against a truly powerful enemy. Over a millennium has passed since Diomedes last contended with Medea of Colchis, deranged wife of Jason the Argonaut, but neither her madness nor her devotion to Hecate, goddess of witchcraft, has waned, and she intends to use the Cup of Jamshid to release across the world a dark brand of chaos unseen in human history.

Immortal since the Trojan War, Diomedes must once again fight for mortals he understands less and less, against a divine evil he may never truly defeat.”

Author:
“Brian S. Leon is truly a jack of all trades and a master of none. He writes just to do something with all the useless degrees and skills he’s accumulated over the years. Most of them have no practical application in civilized society, anyway. His interests include mythology and fishing, in pursuit of which he has explored jungles and museums, oceans and seas all over the world.
His credentials include an undergraduate degree from the University of Miami and a master’s degree from San Diego State University, plus extensive postgraduate work in evolutionary biology at the University of Massachusetts Amherst, where he studied animals most people aren’t even aware exist and theories no one really cares about anyway… Brian currently resides in San Diego, California.”

Appraisal:
Havoc Rising isn’t the type of Urban Fantasy I generally enjoy reading. The Mythology, Gods, and Goddesses sucked me in. Diomedes Tydides is a Guardian, who was recruited thousands of years ago by the Goddess Athena to protect humankind. The story starts with a suicide bombing at the Metropolitan Museum of Art, where we are introduced to the bomber and his mind ramblings, which explains his motive to the reader.

As authorities are scrambling at the scene, Athena, as head of the Metis Foundation, employs Diomedes, who goes by Steve Dore, to join the investigation and recover a stolen item. The foundation’s primary focus is finding peaceful solutions to human conflict. It is known as one of the most respected think tanks in the world. Athena is sure the bombing served as a distraction for a theft of an ancient bronze cup on exhibit in an upper level of the museum. The novel is told through Diomedes point-of-view, and he readily tells us he excels at clandestine operations, intelligence gathering, and combat. He also admits he does not play well with others. But he's forced to overcome this and build a small team to help him.

The plot is fast moving and has many surprising twists as the drama unfolds. The battles are vivid, tense, and grisly as magic is thrown around against seemingly impossible odds while battling unearthly monstrosities. Humor is interspersed throughout to lighten the severity of the story. Diomedes is the perfect tragic hero; he is engaging, courageous, and intelligent, with just the right amount of biting wit.

I found it easy to get totally swept away in this thoroughly engrossing tale. The relationship develops between Diomedes and Sarah is cautious and endearing. The story comes to a satisfying close with some promise of Sarah being included in future missions, which left a smile on my face, especially after she decked Diomedes. I would highly recommend Havoc Rising to any reader who enjoys mythology brought forward in a contemporary setting that includes epic battles between good and evil.

Format/Typo Issues:
I found no proofing or formatting issues.

Posted by BooksAndPals at 9:38 AM