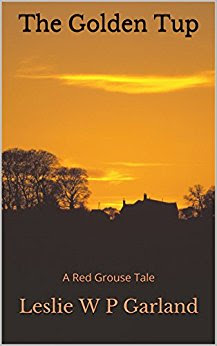 “The Golden Tup - a dreadful tale of paradise being cruelly taken by latent evil.
Can evil be in a place? The tale opens with Verity, a farmer's wife, recalling how a young couple were arrested a few years previously for killing their newborn baby. How could such a nice young couple have done such a dreadful thing? Through a series of flashbacks we learn how they had created their rural idyll, how an enigmatic man had come into their lives and how their idyll and relationship had gradually fallen apart - how, with references to Milton's Paradise Lost, their paradise was lost. Gradually the young wife reveals a dreadful past, but Verity realises that she is holding something back, but what? What is the terrible truth that caused her and her husband to kill their baby?

An adult fantasy story for those who like to think about what they reading.”

“Leslie Garland was born in 1949, qualified as a Chartered Civil Engineer and worked for several years on projects in the UK, the Far East and Africa. During this period he won the Institution of Civil Engineers ‘Miller Prize’ for a paper on tunnelling. Changing times resulted in a change in direction and after qualifying as an Associate Member of both the British Institute of Professional Photography and the Royal Photographic Society he started his own stock photograph library and wrote for the trade press. An unexpected break in his Internet connection fortuitously presented the time to make a start on a long cherished project of a series of short stories, and the first two of ‘The Red Grouse Tales’ were drafted. Two more tales have followed and he is now working on a second batch of tales. He lives with his wife in Northumberland, England.”

The premise of this tale is pretty spooky. At least to me it is because anything that reminds me of Rosemary’s Baby gives me the shivers. But the execution didn’t serve up any stomach squirming moments because the writer told the story as a narration from the perspective of a local farmer’s wife, Verity, as though it was being related aurally. That delivery kept me one person removed from the actual occurrences. This prevented me from knowing the characters (and caring about their fate). Consequently, I was never able to feel the fear from the main characters.

The spookiest parts of the novel would have been experienced when the main characters were exposed to occult happenings, but the third-party delivery prevented that point of view. The same problem dogged the denouement, where the fearful consequence was hinted at rather than being shown.

Mr. Garland is a fine writer and the finished product is of a high technical quality. I think this would be a terrific horror tale if the main characters became the focal point.