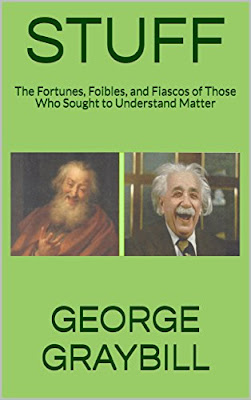 “From Archimedes’ bathtub to Schrödinger’s cat, the reader follows the dramatic and humorous events in the history of the ongoing struggle to understand the basic nature of matter and, in the process, painlessly absorbs all the major concepts of middle school physical science.

The structure of the book takes advantage of the fact that basic concepts about the nature of matter were discovered in roughly the same sequence they are taught. The book begins with the ancient Greeks, who first talked about atoms from a viewpoint that was more philosophical than scientific. The story of the next 2,000 years highlights the events and characters in the history of the study of matter. The book ends on the note that all the knowledge we have gained has led us back to asking philosophical questions such as, “Why does matter exist?” The tone is one of whimsy, weirdness, and irreverence. Although historical events are embellished or even completely fabricated for comic effect, it is always clear that the science is accurate. Adult readers will find this book thoroughly entertaining, but it can also serve as a supplement to a middle school physical science class. It should appeal to students who can’t get enough of science and to those looking for something less boring than their textbook.”

George Graybill says he has “worked as a professional student, oceanographer, bum, woodworker, research chemist, chemistry teacher, and science writer in that order.” Graybill has written everything from magazine articles and science textbooks to questions for standardized tests. You can find out more on his blog.

The author lays out his goal for this book at the very beginning. He wants to mix interesting stories, jokes, and actual scientific facts in such a way that it is both educational and entertaining. As he put it, “It will be like eating ice cream that someone has secretly injected with vitamins.”

For the most part, I think he succeeds. I’m sure there are those who will never get this stuff, but for those who are interested it can refresh your memory about the stuff that you’ve forgotten. (I especially liked the discussion of the scientific method and the discussion of the definition of terms like theory and scientific law.) It will teach you things you might not have learned. (I’ve had a vague understanding of Schrödinger’s cat, but don’t think I’d ever understood the complete story of this famous feline before now.)

I’m not sure reading this is as good as ice cream, but it is pretty darn entertaining. And yeah, I learned stuff without really trying. Give it a try.

A small number of typos and other proofing issues.

Just wanted to stop in and say Merry Christmas, y'all!!!

Thanks Maria. Hope you have a Merry Christmas as well.

About the book: It sounds like a blast, and is delightfully short (I don't have much of an attention span when it comes to science), and I'd quite like to have it to on my reference shelf. But I see the paperback is expensive and wonder if it is expensive because it is heavily illustrated?

That's a possibility, Judi. There are a fair number of illustrations. You can get an idea of how many from the look inside at Amazon. Some of them (I'd say a clear majority) have color in the look inside and would display color in the ebook if using a device that can be in color. I'm not sure how cost of printing is impacted by color, but I'm sure it would be and ultimately that would be reflected in the cost of a paper book. I'm guessing your theory is correct.