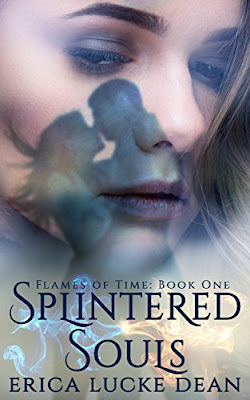 “When Ava Flynn walks away from a scholarship to Georgetown and moves into her grandmother’s abandoned summer home in coastal Maine, she steps into the center of a centuries-old curse. On her first night, she notices a mysterious leather-clad stranger looking up at her third-story window. For weeks, everywhere she goes, Ava catches more glimpses of him, but she can never get close enough to find out who he is.

Over three hundred years ago, Lady Catherine Fairchild risked everything to protect her unborn child, sending a ripple through time that would change Ava’s future. As the mystery unravels, the horrifying consequences of Lady Catherine’s choices drag Ava deeper into a world she never knew existed, trapping her in a conflict that’s been raging since before she was born. A winner-take-all battle for her soul.”

“After walking away from her career as a business banker to pursue writing full-time, Erica moved from the hustle and bustle of the big city to a small tourist town in the North Georgia Mountains where she lives in a 90-year-old haunted farmhouse with her workaholic husband, her 180lb lap dog, and at least one ghost.

When she’s not busy writing or tending to her collection of crazy chickens, diabolical ducks, and a quintet of piglets, hell bent on having her for dinner, she’s either reading bad fan fiction or singing karaoke in the local pub. Much like the characters in her books, Erica is a magnet for disaster, and has been known to trip on air while walking across flat surfaces.

I am totally beside myself after finishing this book. I have to admit I moved Splintered Souls to the top of my TBR list as soon as I received it. This story is different from any of the other stories Ms. Dean has written before. This is a star-crossed lovers story with a twist and right now I am torn. The story began with elegant, crisp prose that paints the picture of desperation Lady Catherine was feeling as she tried to outrace a coming storm. Here the blessing-turned-curse was laid out for the story to continue in present time.

After her husband’s untimely death Ava’s mom decides to move the family to their grandmother’s empty summer house in Port Michael, Maine. Ava has decided to go to a small local college—a branch campus of U-Maine—so she could stay close to mom and her eleven-year-old brother, Josh, after everything that has happened.

Ava is an academically smart but naïve heroine who is a little vulnerable right now. She feels drawn to a guy who seems to be stalking her. Maddox appears to be a nice guy, he’s courteous and friendly with her classmates. However, she knows very little about him or his family. Ava’s school friends are a diverse crowd, they are each well-developed and unique. Their conversations at lunch are typical for young college students. There were off campus parties and beach parties at the lighthouse that needed to be rehashed. Ms. Dean always does a nice job with her secondary characters, they are great friends and I liked them all, even Paige.

After Ava has a wild, vivid dream with who she thinks is Maddox but he says his name is Laith, she starts questioning her sanity. Not long after that Maddox starts acting possessive and jealous. Then an unexpected twist happens when Josh disappears. Maddox has to confess certain truths. Ava doesn’t know what to think now or who is who. Is her boyfriend, Maddox, being completely honest with her? She is caught up in all the sexual tension between them and she can’t think straight. The plot moves fast, I had trouble putting the book down to sleep. I was completely thrown at the ending. But don’t despair… I would describe it as a soft-core cliffhanger. I am chomping at the bit for book two.

None that I spotted.