Review: The Vampire, The Handler, And Me by Eileen Sheehan 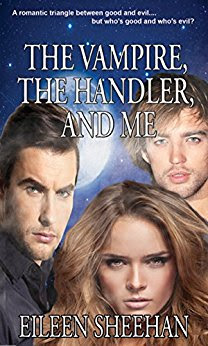 “In a romantic triangle of good and bad, it's hard to tell who's good and who's bad. Lizzy Ewing is caught in a romantic triangle between two enemies: the handsome vampire, Nevi, and the hunky supernatural handler, Geoffrey. A supernatural handler herself, Lizzy must choose between Nevi and Geoffrey. One wants to be with her for all the right reasons, one does not. Will she discover who is who before the bad destroys the good?”

“Eileen Sheehan started out as a freelance writer for periodical magazines and newspapers. From there, she tried her hand at writing screenplays. Her screenplay, When East Meets West was a finalist in the 2001 Independent International Film and Video Festival at Madison Square Gardens, NYC. Finally finding her niche, she lets her imagination loose with new adult/paranormal romance/thrillers (some are steamy and some are tame) with the pen name of Eileen Sheehan… An incurable romantic, she has a love affair with at least one character... one book at a time.”

The Vampire, The Handler, And Me begins with Lizzy Ewing at what she considers to be an upscale New Year’s Eve party. She discovers she doesn’t fit in with this particular crowd, and the party could not have ended much worse for her that evening. What a way to ring in a new year! I didn’t enjoy all of the over descriptions in this section of the story and it did nothing to move the story forward. The words seemed like filler to bulk up the word count, and I almost set the book aside. However, I pushed on because Ms. Sheehan hadn’t introduced the vampire yet, which is the reason I chose this book to read.

Next, I found myself persevering past editing misses such as extra and wrong words, and word repetitions. However, the unique vampire world managed to suck me in and convinced me to stick with the story. The plot and twists in the storyline makes an interesting read, if you can get beyond the poor editing. I think this book is worth investing in a complete reedit. The characters were well described and fully rounded. However, Lizzy’s first-person point-of-view made her feel weak and indecisive. So, I ended up with mixed feelings about The Vampire, The Handler, And Me. But if you enjoy unique vampire stories, you may enjoy this one.

Adult situations and language with a few F-bombs.

Several proofing issues such as missing, extra, or wrong words.