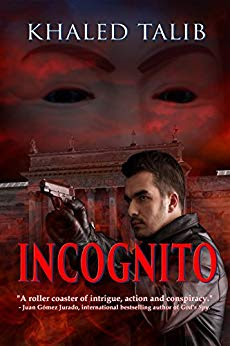 Here is some of what is posted on Amazon about this book: “Pope Gregoire XVII was last seen waving to the crowd at Saint Peter's square from the famous Apostolic Palace window. Despite several layers of tight security, neither the Gendarmerie nor The Entity (the Vatican's secret service) or the Swiss Guards claimed to know anything about his sudden mysterious disappearance… Ayden Tanner, a former British SAS commando officer -- who is officially dead -- is dispatched with two other crew members to find the Supreme Pontiff by The League of Invisible Knights, a covert division of Anonymous that aims to bring about the triumph of good over evil.” Great premise! (BTW: other readers may be puzzled, as I was, by references to the ‘Gendarmerie’. This is the Vatican’s police force.)

Khaled Talib has worked in journalism and in public relations. He has written three novels since 2014 – Smokescreen, Incognito and Gun Kiss. He is a member of the Crime Writers Association and International Thriller Writers. He lives in Singapore.

The puffs for this book claim kinship with the likes of Dan Brown and Robert Harris. That’s a broad church. And a big claim. Talib knows (as all good writers need to) a little bit about a lot of things. I enjoyed much of the material about the Vatican, the information about Turkey and Egypt, and about recent European politics (although I was puzzled to find reference to Italian ‘lire’ since Italy has been using the Euro since 1999). There is a definite ‘Mission Impossible’ vibe, as well as a substantial nod to our old friends the Knights Templar.

This is, at bottom, a story about fake news. Very topical. The Prologue sets the scene beautifully. The prose in it is taut and lyrical. The necessary backstory is laid before the reader. Now the story can hit the ground running …

There is plenty of action in the book. Fights abound. It is a teeny spoiler to let on that our protagonist and his ‘crew’ are ambushed so many times that one begins to wonder just how good they are at what they do.

I found it peculiar that, despite all the action, no progress seemed to be made with finding the kidnapped Pope for the first third of the book.

I also found the swathes of description and backstory (what does Maria have to do with anything?) slowed pace and made it difficult to follow the machinations of the large cast of characters as they whizzed about Europe from Geneva to Rome to Istanbul to the Sinai Desert.