Reprise Review: Our Summer of Discontent by S.L. Baum 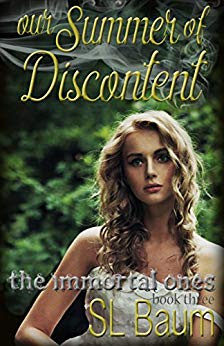 “Summer. A time for travel, relaxation, and above all - fun. But for Charity, her family, and her friends, this summer holds more in store than any of them anticipate.

Emotions run high as life-altering games taunt and test them all. Who will win and who will lose, during their Summer of Discontent?”

A former high school math teacher, S.L. Baum now works as a substitute elementary school teacher, chauffer for her kids, and novelist. She lives with her family in the Southwestern United States. This book is the fourth in Baum’s The Immortal Ones series. For more, visit Baum’s website.

Since getting my Kindle, I’ve read a lot of YA books and this series is one of my favorites. One of the main reasons is the main character, Charity. As an “immortal one,” Charity stopped aging at a point where she appears to be in her late teens. While she’s much older and has experienced much more in life than an average teen, Charity has to maintain the illusion of being the age she appears. This tension, between the older, more mature woman inside, and how Charity has to appear to most of the world, is an uncommon twist that gives her character more complexity than the average teen. I think it also makes Charity more likeable because she shows all the positive attributes of someone of her physical age, without many of the faults someone of that age might have. Baum continues to put Charity and her cohorts in more and more difficult situations, and I continue to care and root for her.

One thing that is different in this volume is the use of several different point-of-view characters, seven if my count is correct. This could be confusing for some people, although Baum attempts to minimize the confusion with an explanation in a note to readers at the beginning, maintaining a consistent point-of-view character within individual chapters, and identifying who that character will be as part of the chapter heading. Some readers will love this (the disparate points of view add to how the reader views and interprets what is happening), while others may struggle keeping track in spite of the contextual cues provided.

Added for Reprise Review: Our Summer of Discontent by S.L. Baum was a nominee in the Young Adult category for B&P 2013 Readers' Choice Awards. Original review ran September 6, 2012

I reviewed based on a pre-release beta copy and am unable to comment in this area.