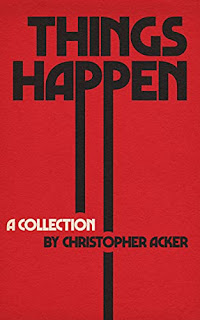 “In these four stories, things happen.

A mother loses her son to a magic trick gone horribly wrong. Now a Google Maps car is trying to erase the last tangible memory she has of him.

Michelle lands her first big role in Hollywood as a prostitute in a Sam Cooke biopic. But her chance at stardom is jeopardized when riots break out after an innocent black man is murdered by the LAPD.

Everyone in St. Louis knows about the Salazar House of Horrors where a teenage girl was tortured and imprisoned. The prosecution asks Brandon—a model railroad enthusiast—to make a miniature replica of the infamous dungeon. The goal is to persuade the jury to put the monster behind bars forever. But constructing such degradation at 1/12th scale with his wife and two daughters lingering over his shoulder pushes Brandon and his family beyond their limit.

Disgraced journalist Alexander Reynolds is knee-deep in depression. Just about the only thing he can muster these days is slithering to his couch to watch The Maury Povich Show. In a sudden stroke of genius, a path out of his humiliation falls into his lap: he will fake his way to being a guest on Maury. There’s only one problem. He’ll need to convince his wife—the Oscar-winning filmmaker—to play a co-starring role.

The characters here are bruised, battered, and just plain exhausted. They’re like us. And like us, not everything works out for them. It’s this humanity that’s at the heart of this unforgettable collection.

Things Happen offers a poignant yet highly entertaining portrayal of people desperately looking for answers in a time when truth and facts are more elusive than ever. The themes of infidelity, unresolved grief, identity, redemption, and racial injustice are woven throughout, lending these short stories a degree of resonance every reader can connect with. And to keep things interesting, a celebrity or two might even make an appearance.

Above all else, Things Happen reflects what’s going on in this country right now:

A whole lot of something.”

A clinical social worker based in Bridgewater, NJ, Christopher Acker has had his fiction published in several publications. This is his first book.

With four stories and pushing 80,000 words total each of the stories in this book are long enough to be considered novellas. At that length the author fully develops the characters and the plot. Each of them felt like much more than a short story, but also didn’t have the chance to drag, each one keeping my interest the entire way.

The stories were all great with a plot that was entertaining and thought provoking. Each tale made points, if the reader is open to them, while not over doing it. The characters were well developed and credible. I was especially amazed that an author from New Jersey got things so right in so many subtle ways for a character who grew up in Utah (living in Los Angeles during the story).

If it isn’t obvious yet, I highly recommend this book.

Review is based on an ARC (advance reader copy) and I can’t judge the final product in this area.