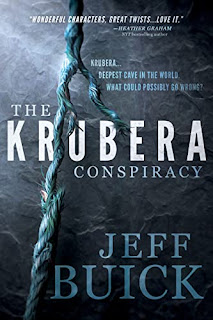 “Ross and Damon Fraser are brothers on an elite caving team attempting a new world depth record, but the wheels come off the moment they arrive in the tiny breakaway republic of Abkhazia. Akhar Kutsnia, head of the country’s shadowy intelligence network, throws them in prison and gives them an ultimatum.”

The Krubera Conspiracy is a tautly crafted narrative set in Abkhazia, a self-proclaimed state that broke away from Georgia. Political intrigue and a claustrophobic descent into the world’s deepest cave create parallel adventures, each driven by increasing tension and suspense. Two brothers plan to attempt a record caving depth until an agent for an Abkhazia intelligence service kidnaps one, a lawyer for the CIA, and forces him to help determine who is threatening the outcome of a critical presidential election. If he fails, his brother will be killed during his descent into Krubera.

The lawyer enlists the help of a CIA functionary in London, who is drawn into an assassination plot that includes an attempt on her life and a harrowing journey from London to Abkhazia with the lawyer. As enjoyable as the story is, my biggest takeaway is a better understanding of a volatile region of the world. South Ossetia gets a bit of notice in the Western press, but I had no knowledge of Abkhazia. The description of Krubera is a fascinating look at the techniques and perils of caving.

My only mild complaint is that many plot elements called for more willful suspension of disbelief than I would expect with a thriller, from incompetent assassins to an improbable blackmail of a CIA official. To quote a character from the novel: “It’s incredible.” Daur shook his head. “A team of assassins and they managed to survive.” A bit too incredible.

Still, this is a novel I will long and pleasurably remember.

Review is based on an advance reader copy, so we can’t gauge the finished product in this area.