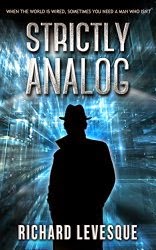 Richard Levesque has spent most of his life in Southern California. For the last several years he has taught composition and literature, including science fiction, as part of the English Department at Fullerton College. His first book, Take Back Tomorrow, was published in 2012, and he has followed it with other science fiction and urban fantasy novels, novellas, and short stories..

California has won the war and is controlled not by a government of the people, but by Cal-Cor, an all-powerful corporation that controls information and whose shares are the only trading currency. Cal-Cor develops new technology that will deliver not only total control to information, but also to the minds of everyone who is plugged in. Lomax, a private detective, gets pulled into the mix when his daughter is accused of murdering a key Cal-Cor employee.

I skipped my normal selection routine for this book after I read the opening sentence: “I was dreaming about Las Vegas when the ferret woke me.” Yup, no contest, I was all-in.

This was a fun read. Told in first person, Lomax, our main character, is a cool guy carrying a lot of baggage. The world Mr. Levesque builds, set in some not-too-far future, is a believable extension of modern-day American. The States have gone to war. California won and is where the party is. The other states are where you get shipped to if you screw with Cal-Cor--the corporation that runs the Sunshine State.

Lomax lost the use of one eye in the war of independence, which prevents him from operating iyz. Iyz are a potential extension of Google Glasses. Everyone who’s anyone wears them to stay connected. The Iyz hook to the web, and information is projected from the iyz to the user. Images and information are manipulated using two thimble-like devices. Some folk even have their finger controllers embedded. Because our hero has only one eye, he can’t operate iyz, so he’s digitally impaired—hence the title of the book, and the name of his detective agency—Strictly Analog.

I love sci-fi that builds worlds populated with interesting social and technical possibilities. Here are a few concepts I particularly enjoyed:

Lomax and many other people can only afford to live in one of those storage facilities where you rent by the month to store your surplus junk. His front door rolls up.

All purchases are made with ‘shares’ on a card—no money, honey.

He may be analog-only, but he uses a banglight to save his daughter when she’s attacked by a gang of thugs—illegal, and no bigger than a lighter, this neat device sends crippling pain through a pair of iyz—handy if you don’t wear them.

Cars are all electric, but they come with noisemakers to simulate an engine, or perhaps a purring cat, or roaring tiger.

And, of course, iyz. And therein lays the plot, because some techno genius has developed a better and more direct way of communicating and controlling everyone who uses them. Finding this renegade sucks Lomax into a vortex where his teenage daughter’s life is at risk. Lomax may need to go digital to save her.

I really enjoyed reading this one. It's a story that should appeal to fans of early Gibson or Sterling. And now that our world is much closer to the cyberpunk vision of tomorrow that was forecast decades ago, the story should appeal to contemporary detective fiction fans too.