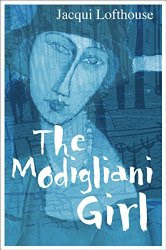 Jacqui Lofthouse is a teacher of English based in the suburbs of London, England. The Modigliani Girl is her fourth novel. Jacqui is the founder of “The Writing Coach”, an international mentoring and development organization for writers.

Anna Bright never wanted to write a novel. At least, that’s what she tells herself. But a chance encounter with a famous novelist and a surprise gift of an art book cut a chink in Anna’s resolve. The short, tragic life of Modigliani’s mistress, Jeanne Hébuterne, becomes an obsession and before she knows it, she has enrolled in a creative writing course, is writing about a fictional Jeanne and mixing with the literati.

The back cover copy almost had me passing on this novel--nothing wrong with the copy, I’m just wary of stories that feature a writer as the main character in case the author uses the novel to harp on about how difficult is the life of the poor suffering writer. Of course it’s difficult. If it wasn’t, everybody would do it—oh wait…

Anyway, I had no cause to worry on that count. This is a beautifully written novel (and I mean that in every sense of the word). The characters that Anna has to deal with are so stereotypical and exaggerated that the story often drips deliciously with satire. Especially the third act, which features a Reality TV show where viewers vote each week on a new chapter released by one of twelve authors works. The authors are whittled down to an eventual winner who gets a publishing deal (of course) and instant fame (naturally).

The tragic life of Jeanne Hébuterne, who, although she was an accomplished artist herself, committed suicide following the death of Modigliani rather than live in a world in which he didn’t exist, forms a juxtaposition that constantly gives Anna cause to question her friends and her life.

I’m glad I didn’t skip by this unusual, fascinating and multi-layered novel.

English spelling and locations, but nothing that would cause an American reader any confusion.