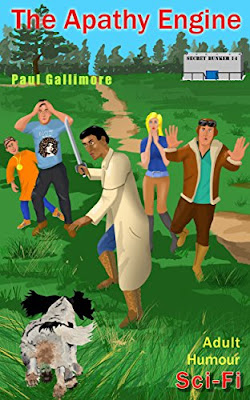 “Set in a Utopian society in 2042, intelligent machines seem set to take over the planet.

The interruptions to the normal, smooth running of an untroubled world have already begun in the form of 'the glitching'.

Everybody sees the problems, but due to the numbing effects of a secret government mechanism, nobody is bothered enough to react when mankind's defenses are probed in readiness for humanity's last stand.

Only Cyril Greaves, the disgruntled proprietor of the English Pub League website, along with his eccentric band of friends seem ready and willing to step into the breach to fight the forces of mayhem and anarchy, and save the world.

With only an under-developed, prototype robot, a group of Sunday league soccer players, an extremely annoying teenage genius, Neville the lonesome strider, and a handful of psychopaths to help him, Cyril must defeat the mighty corporations and the all-seeing quantum super-computer menace before it's too late.

Paul Gallimore is a novelist with two books published, a painter, and an entrepreneur with a web design business.

Have you ever read a book that you’re not sure what to make of it? Something that fits some patterns you’ve seen before, but then again, isn’t quite like any other book? That’s a reasonable description of my thoughts about The Apathy Engine and I’m struggling to figure out how to describe it.

Was it funny, thought provoking, and have interesting characters? Sure.

There is definitely some humor or satire here. The society at the time it takes place is utopian, but in some ways the book feels dystopian. (Maybe perfect isn’t so great after all.)

Then there is that little twist at the end. What the heck should I make of that? I wonder if you’ll interpret it the same way I did?