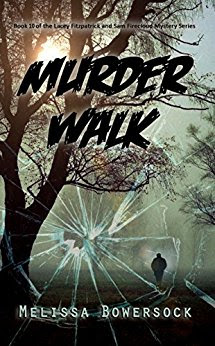 “The best friend of Sam Firecloud’s son, Daniel, has been murdered. The boy is having a hard enough time dealing with the loss but then discovers that he’s inherited his father’s mediumistic ‘gift’ for communicating with the dead, a gift he doesn’t want. Lacey Fitzpatrick, Sam’s wife and partner, wants to start their own investigation into the murder, Sam is more worried about his son than the unsolved case, and Daniel just wants all ghosts to leave him alone. The family is being torn in three separate directions, but the murderer is still on the loose and may come after Daniel next, because the ghost is talking.”

“Melissa Bowersock is an eclectic, award-winning author who writes in a variety of fiction and non-fiction genres: paranormal, biography, western, action, romance, fantasy, spiritual, and satire. She has been both traditionally and independently published and is a regular contributor to the superblog Indies Unlimited. She has a tattoo on the inside of her left wrist that says IMAGINE. In her next life, she plans to be an astronaut. She also writes under the pen name Amber Flame.”

Lacey, Sam, and the kids are settling into a nice routine in their new apartment and are now looking for an affordable art studio for Sam’s new venture. Daniel is fourteen and entering that moody stage most teens go through. However, when his best friend, Jason, is murdered, Daniel is forced to grow up quickly. Especially when Jason’s spirit starts speaking to him. Murder Walk stems around the effects this murder has on the Fireclouds, the LaRosas, Daniel’s new girlfriend, and Jason’s family as well. It deals with relationships from all angles.

There is tension between Lacey and Sam about how to handle Daniel and his new situation. Tension between Sam and Daniel, Sam knows Daniel knows more than he’s saying. And there is the guilt Lacey feels when she reaches out to Jason’s mother without telling Sam or Daniel. She also reaches out to the LAPD homicide detective, but keeps that info on the down-low.

What’s it going to take to get the whole story out of Daniel about what he is seeing and hearing? What can Sam do to help his son feel more comfortable around spirits when he knows Daniel has to accept this new talent he has? And will Kenzie have the spirit calling as well? What’s it going to take to keep Daniel safe if the murderer finds out Daniel can talk to ghosts?

Murder Walk has a nice pace and flows smoothly from one scene to the next. It’s thoughtfully written and the dialog is realistic in all aspects. It shows what it is like for a family trying to carry on with mundane life necessities after a trauma hits so close to home. With all the sadness there are lighter enjoyable moments. As Sam finds a place for his studio. Lacey and Kenzie approve, but Daniel is not so sure until his girlfriend Tori finds out about it. Don’t miss out on this one!

No issues in proofing or formatting to speak of.