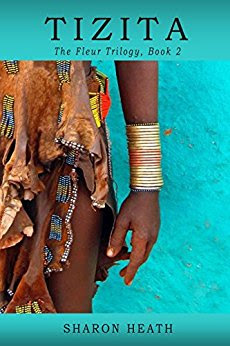 Amazon’s blurb says “Physics wunderkind Fleur Robins, just a little odd and more familiar with multiple universes than complicated affairs of the heart, is cast adrift when her project to address the climate crisis is stalled. Worse, her Ethiopian-born fiancé Assefa takes off right after her 21st birthday party to track down his father, who’s gone missing investigating Ethiopian claims to the Ark of the Covenant. … Assefa’s reconnection with a childhood sweetheart leads Fleur to … a bumbling encounter with her rival. The experience of tizita – the interplay of memory, loss, and longing – [flings] Fleur into conflicts between science and religion, race and privilege, climate danger and denial, sex and love ... with humor, whimsy, and the clumsiness and grace of innocence.”

Amazon vouchsafes “Sharon Heath writes fiction and non-fiction exploring the interplay of science and spirit, politics and pop culture, contemplation and community. A certified Jungian Analyst … and faculty member of the C.G. Jung Institute of Los Angeles, she … has [inter alia] given talks … on topics ranging from the place of soul in social media to gossip, envy, secrecy, and belonging. She blogs at http://www.sharonheath.com/. Which is all to say that she knows whereof she writes. Her breadth of knowledge about all manner of things is astonishing. She has the magpie eye of the true writer.”

This is an extraordinary book. It is so stuffed with ideas that they overflow. There is a curiosity about the world in all the vibrant characters who inhabit the book. I learned much (as you know, I do like to finish a book feeling that I have done so) about physics, philosophy, religions (various), Ethiopia, Jane Goodall’s Gombe chimp sanctuary, the odd way humans behave toward each other and (not the least just because I’ve put it last) climate change. Read it to be amazed and informed as well as royally entertained. (Some of the word choices are exquisite.) Along the way Heath discusses racism, rape, female circumcision and abortion in the present day through her characters’ experience of these. There is plenty of sex. There is also plenty of mild self-harm (if self-harm can ever be mild).

Do not be put off (but be prepared for) descriptions of everything a character’s eye lights upon (the descriptions are always vivid). There is also rather too much harking back to the first book about Fleur Robins (The History of my Body). There is both not enough to make what happened in the first book meaningful for someone who has not read it, and too much of it for Tizita to carry without it becoming burdensome. These interpolations interfered with pace from time to time. This strategy also threw up that Fleur’s life (physics project apart) seemed to have been marking time for the five years between The History of my Body and Tizita.

A few f-bombs, plenty of sex, description of rape, female circumcision, and self-harm; discussion of abortion and racism.