Reprise Review: Home Owner with a Gun by Samuel Hawley 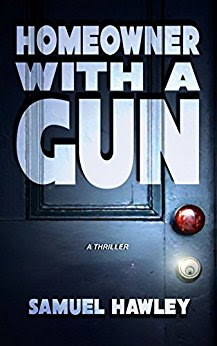 Jeff is a quiet family man who works at the local grocery store. At home, in the middle of the night, he’s awoken by noises downstairs. Armed with a gun, he surprises two men in his kitchen and kills them both. The story follows Jeff as the ramifications of that night’s events change his life forever.

Samuel Hawley taught English in East Asia for many years before becoming a full-time writer. His books include the novel Bad Elephant Far Stream and the nonfiction works Speed Duel: The Inside Story of the Land Speed Record in the Sixties; I Just Ran: Percy Williams, World’s Fastest Human; and The Imjin War: Japan’s Sixteenth-Century Invasion of Korea and Attempt to Conquer China. He lives in Kingston, Ontario, Canada.

Jeff is an unlikely main character—just an everyman, really. His deadly shots on the night of the break in had no malice about them. He was as terrified as he crept downstairs to protect his family as I would have been.

Initially, I thought maybe Jeff would have problems with the police believing his story—I was worried for the man. The problems that did ensue, however, were of a quite different nature, and, for me, totally unexpected.

I don’t want to spoil the story, so I won’t go into detail, but a second thread that runs through the novel involves some local gangstas. The author drew these characters as vividly as he did Jeff and his family. And the juxtaposition between these two wildly different groups of people was what made the novel so compelling.

I read this in two sittings, staying up late. From an unlikely beginning, the novel grows and develops into an action-packed, well-written thriller.

Added for Reprise Review: Home Owner with a Gun by Samuel Hawley was a nominee in the Thriller category for B&P 2015 Readers' Choice Awards. Original review ran January 28, 2015.