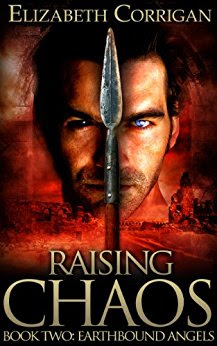 “When good fails, chaos rises to the challenge... when Bedlam learns that the archdemon Azrael has escaped from the Abyss in order to wreak vengeance against the person who sent her there—Bedlam’s best friend, Khet—he can’t sit idly by.

Only one relic possesses the power to kill Khet, who suffers immortality at Lucifer’s request: the mythical Spear of Destiny, which pierced Christ’s side at His crucifixion. Neither angel nor demon has seen the Spear in two thousand years, but Azrael claims to know its location. Bedlam has no choice but to interpret woefully outdated clues and race her to its ancient resting place.

His quest is made nearly impossible by ... a dedicated cult intent on keeping the Spear out of the wrong hands. But to Bedlam, “wrong” is just an arbitrary word, and there’s no way he’s letting Khet die without a fight.”

Ms. Corrigan owns over 150 seasons of television on DVD, loves zombie jokes, and her only culinary skill is the ability to make chocolate chip cookies.

Her first novel, Oracle of Philadelphia, was a nominee in Books and Pals 2014 Readers' Choice Awards.

“The daily life of a chaos demon is delightfully sinful—overindulging in Sri Lankan delicacies, trespassing on private beaches in Hawaii, and getting soused at the best angel bar on the planet.”  Bedlam was by far my favorite character in Oracle of Philadelphia and I was excited to learn that he would have his own book. This story has several plots that weave back and forth in time with some interesting history, new characters, and adds more depth to characters we have met before.

Ms. Corrigan uses differing points of view, which are divided into chapters, to shift from one scene to another keeping the suspense heightened between story threads. One new character was Siren, the Angel of Truth, who ends up being quite entertaining. Not only does she have to speak the truth, others around her must speak the truth as well. They cannot lie when in her presence. Siren could end up being another favorite character of mine, solely because of her inner dialogue. Bedlam's inner dialogue is totally unique as we get to listen to his good side argue with his demon self throughout his tests of worthiness by the Keepers of the Spear of Destiny, it was pure gold.

This is a complex tale that requires a lot of attention to details. If you read through quickly you will find yourself wanting to go back and reread sections. I wouldn't consider this a light beach read. But if you want to be pulled into a unique story with depth this is a good one for that. The pace is fast, but readers are given time to take a few breaths when the story switches to Carrie, who is vacationing on an east coast beach. She also has her own story within this book. So there is a lot going on throughout.

The ending was amazing, after I got past the gut wrenching scene where I thought I might have to throw my Kindle against the wall. By the way, I have never thrown a book but I could feel the need rising. I could not have been more satisfied and I didn't see it coming! Heaven is going to be turned on its ear and I can't wait to see who the next book is about or where the story may lead.

This is the second book in the Earthbound Angels series. Ms. Corrigan did an excellent job filling us in on the facts we needed to know for this story, it could be read as a stand-alone, although, I highly recommend reading Oracle of Philadelphia.

I found no significant issues with editing or formatting.