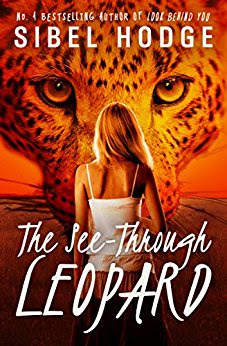 “Most sixteen-year-old girls are obsessed with their looks, but Jazz Hooper's obsessed for a different reason. After a car accident that kills her mum, Jazz is left with severe facial scars and retreats into a dark depression.
Fearing what will happen if Jazz doesn't recover, her dad makes a drastic decision to move them from England to a game reserve in Kenya for a new start. And when Jazz finds an orphaned leopard cub, it sets off a chain of events that lead her on a two year journey of discovery, healing, and love.”

“Sibel Hodge is an International Bestselling and Award Winning Author. She has 8 cats and 1 husband. In her spare time, she's Wonder Woman! When she's not out saving the world from dastardly demons she writes an eclectic mix of genres.”

This is an extremely captivating novel on many levels. Jazz was a typical self-absorbed teenager before the auto accident that killed her mother and left her with devastating facial scars. Now, a year later, she is still drowning in self-pity and guilt because she feels like she was solely responsible for causing the accident. Her father, being a large animal vet, and her mother lived and worked in Kenya at Kilingi Game Reserve before Jazz was born, so it was not unusual when he decided to try for a new start there when an opening for a new large animal vet became available at the same game reserve. Nathan, Jazz’s father, is hoping against all odds to draw Jazz out of her isolation and depression by changing the scenery.

The story is told through Jazz’s eyes so the reactions of school friends and strangers to Jazz’s scarred face was colored by her own insecurities, in some cases, but taunts continued in Kenya as well. When Jazz comes across a baby leopard cub, whose mother had been killed by poachers, she vows to raise the cub that she names Asha, with plans to release the leopard back into the wild when the time is right. With the help of Zach, who educates Jazz in all things leopard, she learns this is no small undertaking. Zach is a few years older than Jazz and is the son of the owners who run the Kilingi Game Reserve. He was born and raised in Kenya and plans to follow in his parent’s footsteps.

It is clear that Ms. Hodge did a lot of research to write this story as realistically possible. The prose used to paint the picture of Kenya made it easy to see and step into the African landscape. The education Jazz received about large predators was enlightening. One of the toughest lessons Jazz had to learn and accept was the whole circle of life theme. She had to be able to teach Asha how to hunt live game or she wouldn’t be able to be re-released into the wild. The information about poachers, poaching, and its consequences’ is heart-breaking and needs to be heard far and wide.

As Jazz immerses herself in rearing Asha and becomes an advocate for endangered species she gains a confidence in herself that helps her see past her own scars. This is a beautiful, educational, and inspirational story to be enjoyed by all ages. I would encourage everyone to pick up this book, read it, and then share it with a friend.

"A percentage of the royalties from the sale of this book will be contributed to Panthera, a leading international conservation organization dedicated to protecting and preserving the world's big cats, plus other wildlife conservation groups."

No issues with formatting or editing.

Thanks so much for the amazing review! I'm so thrilled you enjoyed The See-Through Leopard :) xx

You're welcome, Ms. Hodge. Thanks for dropping in and commenting.