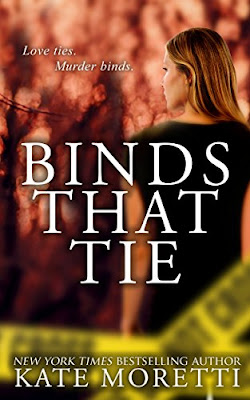 Maggie never felt as though she belonged until Chris Stevens showed her what true happiness meant. Ten years into their marriage, miscarriages and infidelities have scarred them both. Despite their perfect-couple image, Maggie can’t look at Chris with anything but resentment. When a charismatic stranger offers the opportunity for a little harmless flirtation, she jumps into the game.

But charm soon turns to malice, and a deadly split-second decision forces Maggie and Chris onto a dangerous path fraught with secrets, lies, and guilt. With no one else to turn to—no one she dares trust—Maggie will ultimately learn just how binding marital ties can be.”

A scientist in the pharmaceutical industry and an avid reader all her life, Kate Moretti lives with her family in Pennsylvania. This is Moretti’s second book. Her first, Thought I Knew You, beat all comers in the chick-lit category of the inaugural 2013 Books and Pals Readers’ Choice Awards and recently hit both the New York Times and USA Today bestseller lists.

Wow. What a ride.

Thrillers are often described as plot driven because the plot is the most important part of the story. Character development matters, but not as much as in other genres. Binds That Tie almost felt character driven, yet was still clearly a thriller. The main characters, Chris and Maggie Stevens, along with some of the more important second-tier players, have current problems, past histories, and a few skeletons that have been shoved into the dusty corner of the closet. The characters are complex and their characteristics, especially their past, drives the story more than in the typical thriller.

The twists and turns of the story kept me guessing as events start to spiral out of control and just get worse and worse. I couldn’t figure out what was going to happen or what I wanted to happen as I struggled with some questions. When is the right thing wrong, and really, what is the right thing here?

Added for Reprise Review: Binds that Tie by Kate Moretti was a winner in the Thriller category for B&P 2015 Readers' Choice Awards. Original review ran June 5, 2014