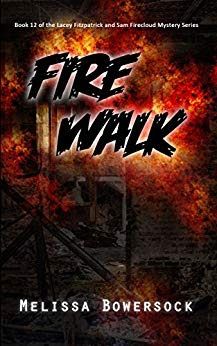 “A property in the town of Meadeview, Massachusetts has a problem with fire. Anything that is built there burns to the ground. Medium Sam Firecloud and his partner, Lacey Fitzpatrick, are called to the small town to investigate the strange physical haunting, and their research leads them deeper into the dark underbelly of the tight knit community. The more they uncover, however, the more the townspeople are threatened by the old secrets—secrets the locals would much rather remain buried.”

Fire Walk is different than the other mysteries Sam Firecloud and Lacey Fitzpatrick have investigated. Beau Hewitt is trying to build a convenience store on a corner lot he bought a couple years ago. Whenever he gets the walls up on the property it burns to the ground. The police and the insurance company are starting to question how the fire is started when the arson investigators can find no clues.

When Sam walks the property he feels an irate ghost. However, finding the source of the rage is tricky when the townspeople try to keep their secrets hidden. Lacey’s internet skills and a friendly talkative waitress turn out to be the key to the beginning of finding out facts to help this raging spirit move on. The plot moves at a good pace as Lacey’s search comes face to face with the town’s bigotry and racism. The dialogue is intelligent and engaging. I love the way Ms. Bowersock weaves her mysteries together. Her depth and connection with the human spirit seems to be never ending.

No issues to note.