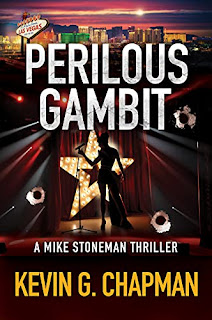 “A murder can sure put a damper on a wedding party.

An unexpectedly hurried marriage in Las Vegas was not what Jason and Rachel planned, but circumstances made it their best option. At least Rachel would have her brother, Jackie, there for the happy occasion. Jason had to find out eventually that Jackie is a drag performer. That surprise turns out to be the least of Rachel’s worries.

When the star of the drag show is murdered and Jackie is accused of the crime, Jason and his partner, Mike Stoneman, find themselves out of their jurisdiction and all-in on a complex case that stretches from Nevada to New York to South Dakota and back again. When somebody tries to kill Jackie, being arrested and having to miss the show take a backseat to staying alive.

All this excitement could scuttle the wedding – and could get them all killed – unless Mike and Jason figure a way to take the heat off of Jackie and convince the killers they’ve made a terrible mistake. But they are not taking no for an answer, and Mike has to risk everything on a gamble that could save the day – or end in tragedy.”

In a lot of ways this is a typical detective mystery with all the things you’d expect to find in such a story. But this book goes a step further. Almost from the beginning we know who is responsible for the murder that attracts the interest of our vacationing detectives, Mike Stoneman and his partner, Jason, whose primary reason for being in Las Vegas is to get married. We even know why and the reason turns up the heat for the characters the reader will (or at least should) see as the good guys, which draws us in deeper. Multiple tangled story threads that with events unfolding in ways I sure didn’t see coming did the trick to keep me reading. Basically, what you should expect from a mystery, but with plenty of unique twists.

Although this is the 5th book in the Mike Stoneman thriller series the books stand alone well enough that not having read the prior books shouldn’t be an issue with reading this one.

Review is based on an ARC (advanced reader copy) and I’m not in a position to judge the final product in this area.

Thanks for the review, Big Al. Very glad to see that you thought the book works as a stand-alone for new readers who pick up the series at the end. Happy Holidays! (Kevin G. Chapman)