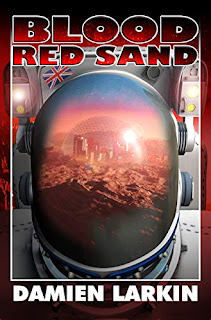 This novel is set in the same milieu as Larkin’s debut novel Big Red which came out in 2019. I have not read that book, but felt very little adrift not knowing its content. Blood Red Sand stands satisfactorily alone. Apparently Blood Red Sand is a prequel, so if you enjoy this you can move onwards (or backwards) to Big Red.

The premise is entirely military, and definitely ‘out there’. There are space ships and habitat domes. There are Panzers and Bren guns. It’s that sort of mashup. Bit of a Boy’s Own, then. Perhaps worth mentioning that the few women in the book are well drawn and hold their own with the men in the plot line, and the violence they are capable of.

Damien Larkin is an Irish science fiction author and co-founder of the British and Irish Writing Community. He lives in Dublin. His first novel Big Red was longlisted for the British Science Fiction Award for Best Novel.

The last time I played video games was SSX on the PS2. Out of touch much? C’est moi. I am absolutely not this book’s target market, yet I enjoyed it a lot. It is well written. Characters are well drawn and shown to the reader through their actions – of which there is masses. The plot is one long battle, with well-explained skirmishes. The pages turn briskly, and a couple of interesting surprises are set up to provide a frisson when one is, perhaps, getting slightly tired of the blood-letting later on. There is just enough humour to leaven the blood and gore. The body count is enormous: it began to puzzle me from about half way where all the reinforcements could possibly be coming from. It does not do to question that sort of thing, nor the motives and morals of anybody in the book, too closely. But the baddies (Nazis) are definitely worse than the goodies (Allies).

This book is very much for gamers. Especially those who play first-person shooters. And who watch films about Nazism continuing after WWII, eg Iron Sky, in which the defeated Nazis repair to the Moon, with a view to building a space fleet to conquer the Earth. In this case (the clue is in the title) the Nazis have made their way to Mars in the early Fifties with a view to rebuilding the Reich and finally conquering the world (mwahahaha). Thither they have been pursued by the Mars Expeditionary Force (and others). The battle begins with space ships pounding away at each other but quickly the fighting becomes hand to hand.

Larkin is good at the strategy and tactics such a Force would employ, the kinds of weapons they might have available to them (plus a twist), and descriptions of the battle. He bangs on a bit about the weaponry (frequently name-checking it), and ditto about the bits of flesh that used to be people getting spattered about by shells, grenades etc. But hey, I guess that’s war. Don’t read this book when you’re eating is my advice.

Given the resurgence of fascism and anti-Semitism in our world it is no bad thing to be reminded how vile both political philosophies are. Although the Allies don’t come out of it smelling of roses either: their mantra is “kill them all”. Nor, I suspect, will all Jewish readers be entirely comfortable with the way they are portrayed.

It reminded me strongly of Starship Troopers without the bugs.