Review: The Final Days of Abbot Montrose by Sven Elvestad 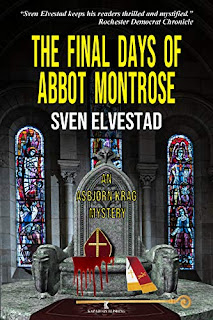 Title: The Final Days of Abbot Montrose, By Sven Elvestad

“It is an evening in early May when the quiet of Montrose Abbey is shattered by the sounds of shouting and broken glass. When the police arrive, they find the abbey library ransacked and bloodstained. Broken furniture and a burning carpet bear witness to a violent struggle. And the abbot himself, the scholarly Abbot Montrose, is missing. Only a torn fragment of his cassock remains, caught in the wrought-iron fence surrounding the abbey.”

Sven Elvestad was a Norwegian journalist, who according to Wikipedia, was the first foreign reporter to interview Adolf Hitler. He wrote his early fiction under the pen name Stein Riverton. The Norwegian literary Riverton prize is named after him. Wikipedia also notes that the style of one of his novels, The Iron Chariot, compares with that of Norwegian Nobel laureate Knut Hamson. If Hamson’s breakout novel Hunger, about a young man incessantly whining about being misunderstood, is illustrative of his style, I would very humbly suggest that the compliment extends not from Hamson to Elvestad, but rather the reverse.

The Final Days of Abbot Montrose is a masterful who-done-it written in the golden age of the genre, when the likes of Agatha Christe and the Ellery Queen duo were spinning best sellers. Sven Elvestad weaves dual threads into a complex plot abundant in twists, laced with humor, and populated with engaging characters. The requisite hints as to the conclusion to a murder mystery are subtle but laid out sufficiently so that the reader does not feel deceived by the writer when all is revealed. Nothing is hidden, merely camouflaged.