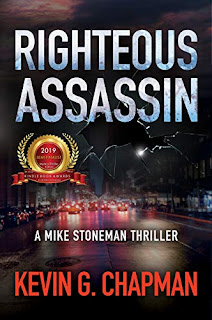 “A MOB BOSS IS EATEN ALIVE BY TIGERS AT THE BRONX ZOO. . . .That was the fourth unsolved murder in four months - each on the last Saturday. The other three were even more unusual . . .  Could they be related? The victims share no similar traits and have no connections. Why would a single killer choose such strange and disparate methods? Why spread your victims across all of New York?

Each new murder adds a piece to the killer's jigsaw puzzle, but unraveling the clues and finding the killer's pattern may not be enough to catch him. NYPD homicide Detectives Mike Stoneman and Jason Dickson have to stop the elusive killer before he completes his decathlon of death. Mike must also avoid being distracted by Medical Examiner Michelle McNeill, who seems to be on his mind a lot lately. She's an asset to the investigation, but is this any time to be starting a romance?  The task force is racing against the calendar. Only one thing is certain - on the last Saturday of the month, there will be blood.”

Although this is the first book in this series featuring Detective Mike Stoneman it is the third book I’ve read and it’s my favorite in some ways, but also gives me one mild regret.

I loved the plot. We, as the reader, are given some insight into the thinking of the serial killer who has run amuck in New York that Mike Stoneman, his partner, and the eventual team they put together is trying to catch in this book. What we knew wasn’t enough to figure out where the story was going, but helped the reader gauge how well the team of detectives were doing in figuring things out which added to the tension. I liked all the characters although I got frustrated with some of them at times, which leads to the regret.

Although the mystery or case in each of the books I’ve read are stand alone, so there is no critical reason why the books in the series should be read in order, I found that some of the characters in this book that I’d already met in future books, specifically Mike Stoneman, his detective partner Jason Dickson, and Michelle McNeil, the medical examiner that autopsies the victims in this case, relate to each other in much different ways in future books, so I know how some of the subsidiary story threads in this book are going to turn out. It didn’t ruin the mystery, but it did change how I reacted to some events this time around. If you’ve read one of the later books in the series, I’d advise you to come back and read this one, it’s definitely a good one. But if you haven’t read the others, start with this one and you won’t regret knowing where things are headed with these characters.

This is the first book in a series of five (or five thus far) books. If you haven’t read any of them, I’d advise reading them in order, but they can be read out of order without ruining the plot of the mystery or thriller aspect.