Review: Time of the Lioness: Internet Apocalypse by S. B Redstone 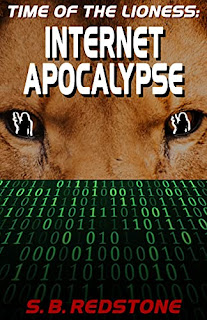 “You’re at work, in school, at home, out shopping, trapped in an elevator, or sky-high on an amusement park ride when the power and lights suddenly go out. For a moment, you’re just annoyed, expecting only a momentary problem. Doesn’t happen! Along with the power outage, all means of communication have been severed. The Internet is down and a terrorist’s face gloats. Fear now creeps into your optimism. Hours later, with a world overly dependent on cyberspace, global economies begin to crumble from this irrevocable cyberattack. Totally freaked out, you’ve now become a prisoner of inertia—clueless about how to deal with anarchy, cruelty, and violence.

Just for you, S. B. Redstone, the Eclectic Author, researched a multitude of destructive computer viruses, thinking he would create one through science fiction for this novel. To his heart-throbbing amazement, his imagined lethal virus had already been developed by international hackers. He was now convinced, along with almost every security expert, an Internet Apocalypse is inevitable. Are you believing our government will save you?

Annie Oakley Frye is a Cyber Warfare Specialist accepted cyberspace had become a cesspool of evil based on the multitude of daily cyberattacks. Annie does not live in a dystopian, fantasy world like Katniss Everdeen, Beatrice Prior, and Lara Croft—she lives among us. Once she discovers this invisible menace is lurking in a million networks, and it can’t be stopped from obliterating world economies, she sheds her mild-mannered personality and becomes the lioness of her youth to survive. Out of kindness she warns her friends about this approaching cyber nightmare, but they scoff at her insider information and doomsday scenario, believing the government won't let it happen. Once the cyber nightmare launches a surprise arrives at her door!

Time Of The Lioness: Internet Apocalypse is Book 1 is an action-packed thriller, with its characters on an emotional rollercoaster. Each chapter will have you wondering how you would cope with this probable post-apocalyptic world as Annie must do.”

“S. B. Redstone views himself as the ‘Eclectic Author’. He does not write stories based on genre, but rather on wherever his imagination and passion take him. His genres so far have been Horror, Suspense Thrillers, Senior Romance, Fantasy, Comedy, Science Fiction, and Young Adult in a post-apocalyptic world. Between working days and most evenings as a School Psychologist and Licensed Clinical Social Worker in private practice, and living a full life on Long Island, always golf and tennis, he put his vivid imagination on paper.”

Imagine a situation where all the world’s computers stop working. All the data the computers have stored disappears or is corrupted. (Any backup of that data turns out to be corrupted too.) Anything that requires computers to work stops working. No electricity. No internet. Can’t call anyone about anything because phones aren’t working. Driving anywhere is an issue because stoplights are no longer functioning. How long would this have to go on before you’d no longer have food to eat (food processors are dead in the water and even getting the food to your local grocery store is problematic in this environment). Paying for things is a problem with debit and credit cards not working, ATM machines down, and no way for a business to cash your check. Unless you’re more prepared than the average person, this situation wouldn’t be pretty and it wouldn’t be a picnic even for those who are ready for such an apocalypse.

I’m sure most reading this are thinking “but that’s never going to happen.” The author makes a good case for the possibility that it could. I won’t go into any details so as to not have a spoiler in my review, but the logic the author uses to imagine this happening isn’t that far out there and imagines just a couple tweaks to be made to things already happening on a regular basis in today’s world.

The premise of this story is that the protagonist, Annie, figures out what is going to happen in advance. She knows it is going to happen and when, but can do nothing to prevent it. So, she attempts to prepare as best as she can to be able to survive what she knows is coming as well as get some of her friends to join her. The difficulties she has, both in preparing and in convincing others makes for quite a story. Since this is a series, you can guess she must ultimately have some success and I’m now wondering what happens to her next.

A small number of formatting and typo issues.