A Dark Protagonist, a guest post from Elizabeth Buhmann, author of Lay Death at Her Door 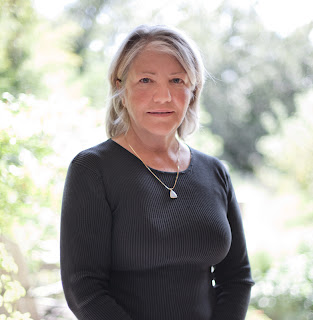 When I set out to write Lay Death at Her Door, I knew that I would be telling two stories. An underlying secret story would be revealed only at the very end of the book. Another chain of events, starting from the first scene, would lead to that final revelation.

So far so good. I thought I had a pretty good mystery in hand. The idea was that a man was murdered and a woman was beaten and raped. The woman—her name is Kate—testified at trial, and a man went to prison for life. Twenty years later, DNA profiling shows that the man convicted of the rape and murder was innocent.

Usually, the witness in these cases has simply been mistaken. In my story, however, Kate was lying—to protect herself, she tells us. She then lived two decades of her life knowing that because of her, a man was in prison for a crime he didn’t commit.

It’s a horrendous thing for her to have done, and it makes her a dicey protagonist. We like to read about main characters we can identify with. They are supposed to be likable, relatable, if not downright admirable. In Kate I had a dark protagonist.

But only Kate could tell this whole story. She’s the epicenter of the quake, the character who makes the crucial choices. She’s the one who drives the action to its logical conclusion.

The book opens with Kate discovering that the man she accused has been exonerated. So what happens next? Nothing, at first. In a case where eyewitness testimony proves wrong, it’s unlikely that a victim/witness would be scrutinized or blamed without clear cause.

Since Kate was a victim of sexual assault, her name would not even appear in media coverage of the exoneration. She could have weathered the overturned conviction. The case might very well have gone cold, and the real killer might have gone free.

But in murder mysteries, the truth always comes out in the end, and Lay Death at Her Door is no exception.

Two forces drive the story toward conclusion. One is Kate herself. She is what she is, the same woman who set the drama in motion. Like a tragic heroine, she staggers and ultimately falls because of her own essential flaws.

The other force for truth is her nemesis—a detective from the original homicide investigation who never did believe Kate’s story. Elsa Gabriel can’t solve the crime until Kate slips up, but she is there to catch the least error and bring it home.

Lay Death at Her Door is not the classic mystery solved by a champion of justice. It’s the story of a woman deeply compromised and compelled by decisions made early in her life, who then, being who she is, brings about her own downfall.

Thank you so much for letting me post about my book! You've got a great book blog.