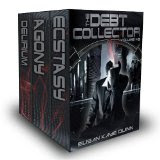 Availability
Kindle  US: YES  UK: YES  Nook: YES  Smashwords: NO  Paper: NO
(note: These are available as three volumes or in a collection with all three. These links are to the collection)
Click on a YES above to go to appropriate page in Amazon, Barnes & Noble, or Smashwords store

The author is a highly qualified engineer who was born in California but now lives in Chicago with her family.

You can learn more about the author at her website.

This is a collection of three short stories – Delirium, Agony and Ecstacy - of roughly equal length.

Lirium is a debt collector. People nearing the end of their lives can sell their remaining time on the planet to clear their financial commitments. An agency exists to transfer this life force to those that can best use it – scientists involved in developing products to make the world a better place, for example.

I was drawn to this series of short books by the genre description of ‘future noir’.  As a kid I read a lot of sci-fi (where I would plant this book) and now a lot of noir so I felt this would be an interesting read. I wasn’t wrong. The writing is surprisingly compelling and the world the main character, Lirium, inhabits is well drawn. It’s not particularly gritty (compared to what I typically read at least) and it drifts towards being aimed at the YA genre. Yes there’s sexual references, but it’s relatively tame and there’s no swearing within.

In the first story, Delirium, we are introduced to Lirium. He’s twenty but looks significantly older, his two years as a debt collector, like a human grim reaper, has been hard on him. He constantly fears for his life, sees danger in every shadow and can’t have any friends. After a hit he comes back down to earth with vodka and a sex worker, but this latter woman, Elena, has a difference - a sick sister who needs the life force to keep her alive.

In Agony Lirium has moved on, literally leaving Elena behind him. He meets his case handler who spots the trouble he is in and assigns another collector, Ophelia, to help him. However the mob get their hands on Ophelia.

Ecstacy finds Lirium desperate to find Ophelia, despite being told she’s more than likely dead. Lirium also comes back into contact with Elena and meets her madam. The sex workers are actually working for good (I’ll let you find out how) and want Lirium to join their cause. But Lirium is solely focused on finding Ophelia and goes to the mob to get her back…

This was strong writing that kept me wanting more. There are plenty of hooks and depth to the stories. The characters are good, the dialogue interesting. It left me keen to read the rest of the series to see what happens to Lirium.