Joyce Carol Oates & Me: A guest post from Rita Plush 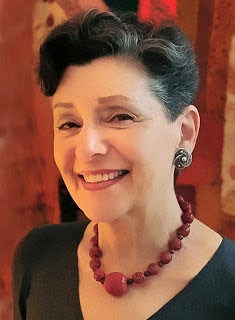 Back in the summer of 2004, after reading that Joyce Carol Oates was giving an author talk at a local library, I decided to print out the first chapter of my novel, Lily Steps Out (Penumbra Publishing 2012), enclose it in a SASE and bring it to the reading. She’ll say NO? She’ll say NO. Nothing ventured. Nothing gained.

Off the library I went, and sat through her talk clutching my offering with sweaty hands and a pounding heart, all the while instructing myself, DO IT! DO IT!—Full disclosure: I was starting to chicken-out. Her presentation over, I queued up to buy her book and ask her—beg if necessary—to read my chapter. My turn came. She autographed my book. I mustered all my courage.

“Ms. Oates,” I said, “I’m a writer too and I’ve written a novel. It would mean so much to me if you would read the first chapter.”

“Ms. Oates,” I said. “You’re like a movie star to me.” (This is true.) “I’ve read almost all of your novels and you’re collections of short stories more than once.”

I could sense the impatience of the crowd behind me waiting their turn. Move it lady, someone muttered behind me, but lady didn’t move. Lady stood there citing short stories Oates had written years and years before, until finally, I heard, “Send it to me at Princeton.” Words from heaven. I flew home, called the college, got her address and ran to the post office.

About a month or so later I received this typewritten postcard:

Your story is very engagingly written. The voice is shrewd, sharp, funny, and yet tender. Perhaps the theme of the “Middle-aged housewife who becomes impatient with her life” is somewhat familiar, so it’s difficult to make such material distinction. Still this is promising, and might well make a readable and marketable novel. Good luck!

I couldn’t believe it! But there it was, from her brilliant fingertips—Joyce Carol Oates, the esteemed, the prolific—she has her own Book of the Month Club, and why shouldn’t she? the woman writes a book a month—the most fabulous of the fabulous, whose books I loved, whose short stories I swooned over—Joyce Carol Oates liked my chapter. She thought it PROMISING! If something could be worn out by looking at it, that postcard would be dust today.

When I knew my book was to be published, I scanned the post card onto a letter asking Ms. Oates if I could use the quote on the cover. A few weeks later I received the reply, “Yes you can. Good luck!”

And there it reads on the cover of Lily Steps Out:
“…engagingly written. The voice is shrewd, sharp,
funny, and yet tender.”

Words I will always treasure… brought to me by Joyce Carol Oates.

This story was previously published on Jenny Milchman's blog.

Rita Plush is an author, teacher and lecturer on the decorative arts. She is the facilitator of the Self-published Authors’ Roundtable that meets monthy at the Manhasset Library in Manhasset, LI.  During her thirty-five years as an interior designer, Rita was the coordinator of the Interior Design/Decorating Certificate Program at Queensborough Community College and taught several courses in the program.

The publication of her novel, Lily Steps Out (Penumbra 2012), was the subject of a feature article in Newsday’s Act II section in July, 2012 called, “Published & Proud,” followed by “Rita Steps Out,” in the Times Ledger, August, 2012.  Her short stories appeared in many literary journals including The Alaska Quarterly Review, The Iconoclast, The MacGuffin and Passager before they were included in the collection, Alterations (Penumbra 2013).

Books and Pals review of Lily Steps Out

Wow. Rita, I would have passed out in a fangirl heap and died on the spot. Fantastic.

Laurie, maybe Rita could introduce you. :)

I have three contemporary writer role models and JCO is definitely one of them. She is a writing beast, and I so admire her. What a great story, Rita!