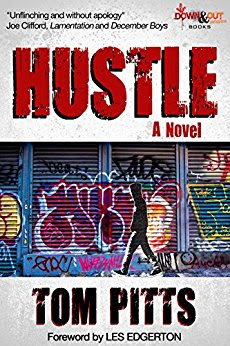 Donny and Big Rich work the streets for a living, turning tricks, doing drugs in their spare time in an endless downward spiral. But Rich reckons he has a meal ticket out in the form of Gabriel Thaxton, one of his clients. He's a wealthy man and wouldn't want his secret to be out there.

The trouble is Thaxton's already being blackmailed...

My expectation was raised when I saw the introduction to Hustle was by Les Edgerton - that the story would be of a certain type and quality. And I wasn't wrong. Hustle is a tightly written novel with a straightforward, no nonsense plant, excellent cast of characters and a real treat to read, surrounded by some testing subject matter.
Everything about this novel is neat. There are few characters and all are very well drawn. Pitts managed to make me care about and like or hate the whole cast. Donny and Big Rich are two kids who spend their time waiting for a score, whether selling their bodies to a client or taking drugs. Donny is new to the scene, Big Rich the more experienced hustler who teaches Donny the ropes.

There's Thaxton, once a tough lawyer, able to get any criminal off any charge - a legal version of Gordon Gecko - but now a shadow of his former self. He's paid a very high price for his success. He's being blackmailed by one of his ex-clients, a drug addict called Dustin. He's truly excellent, a lunatic of the highest order. Dustin has something over Thaxton and is using it to his advantage. And finally Bear, by name and nature, another of Thaxton's clients, but one who's trying to help him. And that's pretty much it for the cast, with another couple of ably supporting bodies.

Successive chapters flip between Donny and Rich, hatching their plan, executing it, then realising it's not going to work as planned, cut in with narrative on Bear or Thaxton. The conclusion is very well done. As I said, a real treat.