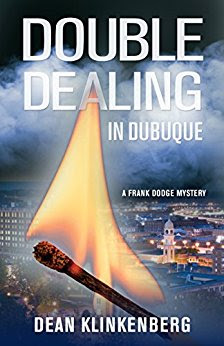 “Writer Frank Dodge is feeling optimistic for a change. He just landed a plum assignment from a national magazine to write about the growth of boutique food in the Midwest. Dodge's mood quickly turns sour, though, when his scheming rival Helen shows up--is she trying to steal another story from him? When a fire erupts at the food convention Dodge is scouting out, two people die and Dodge can't shake the feeling that the fire was no accident.

Dodge's search for the truth will take him from the specialty shops of Galena, Illinois, through the neighborhoods of Dubuque, Iowa, and to the murky backwaters of the Mississippi River, landing him in the middle of a volatile feud between ice cream queen Stella and chocolatier Ashley.

Can he keep Helen at bay as he investigates the fire? And how far will Stella and Ashley ultimately go to skewer each other? Double-Dealing in Dubuque is a compelling novel that delves into what can go wrong when feuds get out of hand.”

This is Dean Klinkenberg’s second Frank Dodge mystery and, like Klinkenberg himself, Dodge operates in what he describes as “Middle America, where—in the mind of my editor—cultural trends arrive via Pony Express. But, hey, it’s my home, where I keep my stuff—parachute pants, pet rock, and all.” There might be a hint there of who the ideal reader for this book would be. The setting for the series in smaller towns and cities along the Mississippi is going to work best for those from Middle America who can laugh at our foibles, but also recognize that those on the coasts aren’t as special as they might think. As Dodge put it, “When folks on the coasts adopt things that we’ve been doing all along, we’re content to let them think they invented it. It’s important to them to feel that way, and we’re sensitive to other people’s feelings.”

As the paragraph above shows, Klinkenberg delivers a few straight lines that should elicit a laugh or at least a chuckle from readers who are paying attention. But there is also a good mystery here. Some interesting characters and a fun time for the reader to follow along with Frank while we try to figure out who set the fire that killed two people at the convention center.

This is the second mystery in this series featuring Frank Dodge. However, this book can be read as a standalone.