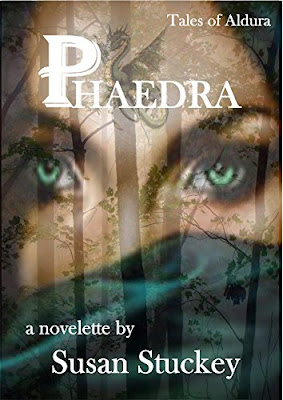 “The call of duty can be a rough path to follow, and some paths are more difficult than others. Phaedra, a Njae Loremaster, must tread one of the more difficult ones. Along the way she confronts her fate as predicted by a Seeress, acquires the assistance of a dragon, and risks her husband, her child, and her life in order to save the peoples of the Twin Goddess.”

“Currently (mostly) retired, but 'back in the day' Susan was a meek, mild-mannered, self-effacing accountant/auditor by day but after 5:00 her imagination broke free. She either played with historical stories, or in the magical World of Aldura she created.

Besides playing in fantasy and/or historical times, Susan searches for dead people (otherwise known as researching her family's genealogy), crochets, loves to try new recipes, and is the servant of multiple fur-children (both feline and canine).”

For more, visit the author’s webside or Facebook page.

This starts as a simple story of a group of newly confirmed Rangers heading out on their first mission to patrol the Barrier Wall. Phaedra is hoping to find a way to diffuse the other members’ hostility toward her. Their patrol is joined by Thaenad, whom we first met in Choices and Kaserie’s Choice.

Ms. Stuckey is an expert storyteller. Her prose is tight, it is hard to believe she can pack so much story in forty-six pages. Her fantasy world is well written, her characters are always interesting and unique, as is the magic they each possess. Phaedra has known her fate since the time she was born, she thought becoming a ranger would help prepare her for her task. This is an emotional story of honor, fortitude, strength, and destiny. I found it heart-wrenchingly well told.

The scope of Ms. Stuckey’s Tales of Aldura keeps growing and this one, in particular, weaves into Tales of Aldura: Choices. If you haven’t read it yet, you will want to now. I will be rereading it.

The original review was posted here at BigAl’s Books and Pals on April 12, 2015.

No editing or formatting issues.

Thank you for the read and the kind review. I'm so pleased you liked it!

Thanks for dropping in and commenting, Ms. Stuckey. I love uniqueness of the world you have built in the Tales of Aldura.