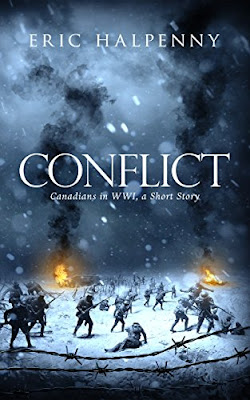 “The Canadian army was widely viewed to be one of the finest fighting forces in WWI, acclaimed by friend and foe alike. However, historical figures and newspaper articles do little to illuminate the true nature of war. For that, one must see through the eyes of those that fought the war. One must stand in their shoes, sleep with their dreams, and shudder at their fears. This venture into the fictional lives of John and Greg attempts to offer that experience. Bound by friendship, these young warriors embark on a journey of trial and tragedy in Conflict, a 20th Century historical fiction. They face death, loss, and grief as compatriots fall in battle and hopes of glory die with them.”

“Eric Halpenny is a seemingly normal engineer by day, but a fiction author by night. He hasn't quit his day job. His preferred subject matter concerns life, existence, choice, spirituality, God, science, philosophy, and the nature of reality—all in the guise of entertaining stories. He started writing novels at the age of eight, but waited to publish until thirty-eight. He is often inspired in the middle of the night or while driving home from work. He lives in Northern California with his wife and three children.”

A quick, thought-provoking short story about two friends serving as Canadian soldiers in WWI. It explores war and the motivations of the two friends as well as how the experience of war might change their outlook.