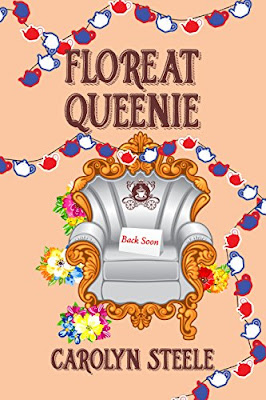 “Christmas 2032: The British Republic’s citizen government are about to begin the second year of their time in office. Last year was pretty rough for some of the randomly chosen ministers, despite the best efforts of the Cabinet Support Team to keep them in line. But they survived, and news that the nation came close to disaster never did leak out. They are wiser now. And a bit cockier and possibly a tad bolshier. It’s just a pity someone will have to put their life on the line this year…”

A native of the UK, Carolyn has worked in a number of professions, from psychologist to driving a semi-truck to an editor and proofreader. Then there's this author thing too, with two non-fiction books to her credit as well as contributing to several more. This is the second book in her first fictional series.

This picks up the story of Queenie Mason who was introduced in the first book of the series, Queenie’s Teapot. It is taking place in the near future after the world’s political systems have gone through some major upheaval and revisions.

In this installment, Queenie continues to practice her own style of diplomacy while the various other governmental officials scramble to deal with a crisis or two, brought about due to how they handled a crisis in the first book. As in the first book, this is an interesting combination of political satire and a future world that may or may not be dystopian. (I can say for sure that it isn’t utopian though.) If you liked the first installment, you’ll want to read this one as well.

This is the second book in a series. Although it could probably be read as a standalone, I advise reading the first book prior to reading this one to get a full understanding of the political world it is happening in.