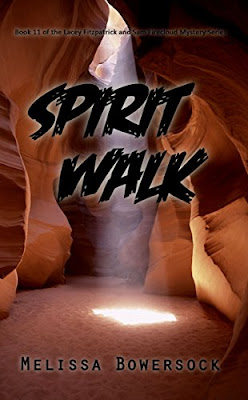 “On the Navajo reservation, a man is found dead at the bottom of a canyon. The tribal police have ruled it an accident. People close to the man don’t believe it, so medium Sam Firecloud and his partner, Lacey Fitzpatrick, are called in to investigate. When Sam’s psychic “walk” confirms the worst fears, the clues lead him and Lacey forward, but the twisted path to the truth turns deadly when it seems the earth itself is trying to kill them.”

I was excited to learn that Lacy and Sam Firecloud were going back to the Navajo reservation in Spirit Walk. A man is found dead at the bottom of a slot canyon, the Tribal Police have ruled it an accident. His wife and friends don’t believe it. Going back to the reservation is always a culture shock for Lacey, however, she loves visiting Sam’s family, and she is learning to respect the land on which Sam was born.

When Sam’s psychic walk through the area of the canyon where the man died confirms the wife’s suspicion that it was not an accident, he also feels a tumult of conflicting emotions from the man. These feelings are going to make the puzzle harder to put together. But Sam needs physical evidence to prove to the Tribal police this death was not an accident. At the slot canyon they met John Stoneburner, a Navajo Nation Ranger, and a non-believer in Sam’s psychic abilities. However, after Sam points out the trail has been brushed with something to cancel foot prints that were over looked by the Tribal police, Stoneburner leaves them to do their work.

The plot twists and turns as Sam and Lacey speak with his friends and employer. All they learn is what a great guy he was and no one carries any grudges toward the man. I enjoyed Spirit Walk’s pacing, it has an easy going laid-back sort of pace that is captivating. The end is a tense, heart-pounding race that has a satisfying but exhausting close. I think Stoneburner is a little closer to being a believer now. And where was my Navajo taco?

I came across no issues in proofing or formatting.