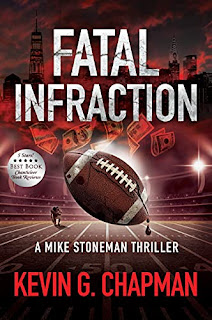 “Controversial quarterback Jimmy Rydell’s body was found naked – on the Central Park carousel. Who killed him? How did he get there two days after he disappeared? . . . And why was the body frozen? Jimmy’s team just wants to move on, after collecting on the $20 million insurance policy. Jimmy’s teammate – the one who threatened to kill him – swears he wasn’t there. Jimmy’s bodyguard had the night off. Somebody is going down for this if NYPD homicide detectives Mike Stoneman and Jason Dickson can find a theory that explains all the bizarre facts. They just hope the case doesn’t tear the team, and the City, apart first.

All police procedurals have certain qualities inherent in the genre. Unless the detectives in question are incompetent the basic story will be the searching for and interpretation of clues to determine who committed the particular crime being chronicled, in this case who killed the New York Jet’s quarterback, Jimmy Rydell. Different twists to the specifics of the crime, the different witnesses and evidence, and the reader trying to figure all this out with the fictional detectives is enough to come up with a solid and entertaining story.

This book throws a few unusual twists thrown into the normal mix. First, we have the team, who typically would want the killer found, but instead appear to care more about the insurance they’re poised to collect and moving on. Then we have an investigator from the insurance company who is allowed to tag along with Detectives Stoneman and Dickson who is hoping to find evidence that will allow him to deny the insurance payout. Last, we get a lot of what I’ll describe as timely issues influencing the case and the result is a story that kept me involved, curious, and on the edge of my seat the whole way.

Although part of a series I didn’t feel as though not having read prior books in the series impacted my enjoyment of this installment. While reading any series in order has some advantages, this book also reads fine as a standalone.

My review is based on the ARC (advance reader copy), so I can’t gauge the final product in area.

After three tries, I'm excited to finally get a review from Big Al's Books and Pals for book #4 in the Mike Stoneman Thriller series. Thanks so much for the evaluation. - Kevin G. Chapman