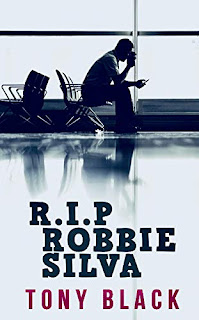 Jed Collins has been out of prison for only thirty minutes before he finds himself landed with a whole heap of problems. The first is Gail, a thoroughly sexy blonde with a bad history. Second is her brutal father, gangland boss Robbie Silva who promises a big payday for Jed but with a high risk. Throw Jed’s own difficult upbringing into the mix and you have an explosive cocktail that leads to violence, theft and murder…Jed is going to be lucky to stay alive and out of prison.

I thoroughly enjoyed this novella, a master class in the genre. It was punchy, gritty and tough - just how excellent noir should be. The fast-paced, violent action in RIP Robbie Silva starts immediately when protagonist Jed, a likeable just ex-con, meets troubled Gail. The story gallops along, taking the reader along for a wild ride that doesn’t let up until the final sentence.

As a result I had to read RIP Robbie Silva in a single sitting, getting myself into all kinds of trouble with the family because I ignored them for a couple of hours. However, it was worth it. I spent the time happily savouring the gritty Edinburgh location, seedy ambiance and the machinations of the troubled characters as they struggled with themselves and each other. A scattering of local vernacular through the story added to the weighty atmosphere without being distracting or off putting.

Here’s an example of the style:

‘The barmaid was in her bad fifties, bat-wings and a corned-beef complexion. Her over-dyed black hair was scraped back in a tight scrunchie and showed at least an inch of grey roots; when she smiled at me I wanted to heave.’

A difficult subject underpins RIP Robbie Silva and is the reason Jed, despite deep misgivings, inexplicably finds himself drawn to Gail. In the explosive finale, Jed and Gail lay their demons to rest with a major plot twist I didn’t see coming.

If you want to learn how to quickly build a highly credible story, strong characters, and a real sense of place then read Tony Black. A great writer and a great story.