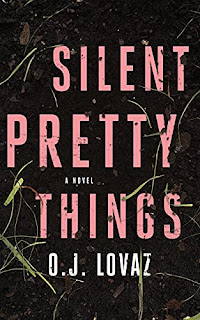 “A small town…a prominent family…a secret. Only two people know the truth, and their silence will have murderous consequences.

Anna Goddard has spent a lifetime being the Good Daughter. Polished and primped into sleek, blond perfection, Anna learned from an early age that being a Goddard meant presenting a flawless façade to the world. But all that changes when Anna stumbles upon a private correspondence that leaves her reeling. With the help of Michael Donovan, a shy but charming local historian, Anna embarks on a journey to find the one thing her family has always denied: The Truth.

Propelled by her mission to protect those she loves, the young woman experiences a tantalizing taste of freedom. But in the process of unearthing the past, Anna and her family will expose a new threat so dangerous it could ruin them all.”

O.J. Lovaz is a husband and father who has lived in three states as well as Puerto Rico. He loves road tripping and exploring the world. A fan of reading, he also likes suspenseful movies, which probably came in handy while writing this book.

There is a theory out there that there are a limited number of basic high-level plots and every story fits one of those patterns. There is certainly some truth in that and what sets books apart is in the differences in how they execute the patterns in a unique way. Even when you get to that lower level though a lot of stories keep some of the same elements with many books of a certain genre whether romance, thriller, mystery, or whatever using some of the same “tropes” or conventions. I’m sure someone could point out instances of those in this story, but it felt much more unique and different in the tale it told than I generally see, which was a positive for keeping me engaged, on edge, and eager to see where things went.

At the highest level most novels have what they call three acts, the first establishing the story world, introducing the characters and ending with establishing what the goal or conflict to be overcome in the book will be. The characters work towards that goal or resolving the conflict in the second act with something happening about two thirds of the way at the end of the third act that shakes things up, then things wind down to the conclusion.

This story fit that basic three-part structure, but all through the second act I was wondering where it was going to go. I wasn’t sure what the characters were going to find out, how they might accomplish their goal, and how they’d react when it happened. That’s because the story in the details were much different from any story I remember reading. (I’m being vague about the details because I don’t think any specifics are going to sound nearly as entertaining as I found the book to be.) The shakeup at the end of the third act definitely shook things up and although it wasn’t outside the realm of where I thought things might go, how the characters reacted and how things wound down (although plenty exciting, edge-of-the-seat entertaining, and even a bit stressful) wasn’t at all something I’d have expected. The ultimate conclusion, while probably not one any of the characters or the reader would have been hoping for, was still a fitting and even satisfying end.

I know, kind of vague there. But if you like suspense, exploring the stresses of familial relationships, and stories that go places you probably haven’t gone before, this book is for you.

This review is based on an ARC (advance reader copy) and therefore I can’t judge the final product in this area.