Review: The Reunion by Gary Wells 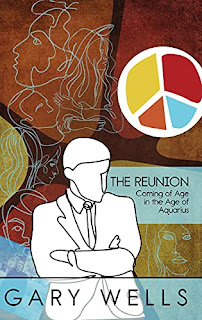 “Robin Williams liked to joke that if you can remember the Sixties, you weren’t really there. He was wrong.

Nick Taylor certainly remembers Coming of Age in the Age of Aquarius. But then Nick remembers everything, because he cannot forget anything. He is a freak. And it has got him in trouble now and again.

But Nick, a classic introvert, still decides to attend the 50th reunion of the Class of 1969 - last to graduate in the Sixties. Unsurprisingly, every person he sees triggers thoughts and memories. And so does who he does NOT see.THAT girl. Not at first …

Everybody has a THAT girl or THAT guy in high school. A first love. Requited or not. Will his first love show at the reunion? How many others wonder the same thing?

Maybe because classmates are the people we grew up with, we all have something of a shared bond, acceptance and trust with these people. Or with some of them, anyway.

What does Nick think, what does he say and what do he and his classmates talk about? What do they remember from one of the most tumultuous times in history? Will Nick let that freak flag of a memory fly? Will it get him in trouble again?

Everybody thinks they know what happened in the Sixties … that it was all about free love, war protests, taking drugs and more …that’s what the history books tell you … and they’re just as wrong as Robin Williams. Because there was a lot more.

So what really happened all those years ago?”

“Gary Wells was a public relations professional specializing in media relations, crisis management and global communications. Earlier he was a journalist at daily newspapers in Kansas City, Cleveland and Jacksonville. He is a 1973 graduate of Kent State University with a BA in Journalism News. He is a member of the Overseas Press Club. He is a past chairman of the International Public Relations Network and a past chairman of the crisis practice of the Worldcom Public Relations Group. He is retired.”

This was an interesting read that certainly got me thinking and remembering. I suspect most middle-aged or, even more so, those who are a bit older would react the same. Although this book is fiction, in many ways it reads like a memoir and as often happens with authors, especially in their first book, a lot of the author’s own life gets integrated in the story. Certainly comparing the life of Nick Taylor, the protagonist of this book, to the author’s biography, turns up a lot they have in common, including graduating from Kent State University after graduating from high school in 1969 (assuming four years in college), working first as a journalist and later going into the public relations field before retiring. I’m sure the author’s personal experiences in these areas are a lot of why the story feels real and credible.

Nick Taylor remembers everything and his mind is always going in multiple directions at once. Lyrics from songs are constantly popping into his head. Memories of things that have happened to him and his experiences throughout life are triggered by some random (or not so random) thing he sees or hears. While the story follows his experience attending his 50th high school reunion, the memories it triggers means that we learn all about Nick’s life. The story comes out jumbled, just like it pops into his brain. For example, he might run into an old friend, start talking to him or her, asking if they still live in the same town or work at the same place as they did the last time he saw them, and while we’re hearing them tell Nick the answer Nick’s telling us what is going through his mind as he is remembering a song that this person reminds him of or an experience he had with them in the past. Both stories are coming out at the same time with a few paragraphs of Nick’s memories, then a few paragraphs of the friends answer to Nick’s question. I’m sure this sounds strange, which it is. It probably also sounds hard to follow, which once I got into the flow of things it really wasn’t, as surprising as that is. The author does a good job of helping the reader follow the frequent transitions in time so that I found it easy to keep track of where we were most of the time.

In summary, an enjoyable, fun, and interesting read. If you’re a touch on the older side and have a fondness for music from the ‘60s, this book is definitely a good fit.