A Plague of Traitors: A Leine Basso Thriller by D.V. Berkom 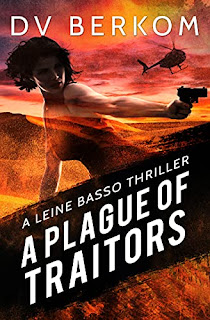 “A former assassin leads a heroic band of foreign fighters to thwart an enemy like no other.

Leine’s called back to war-torn Tripoli, enlisted by her former employer to train a heroic group of Isis-fighting snipers to crush the horrific threat. But there’s a leak, and the Libyan operation goes terribly wrong—the bioweapon ends up in the hands of a brutal terrorist who will stop at nothing to force the West to its knees.

Are there spies in their midst? Can Leine and her warriors prevent a ruthless enemy from releasing the deadly toxin before it's too late? Or will humanity be destroyed in a cataclysmic finale orchestrated by A Plague of Traitors?”

“DV Berkom is the USA Today bestselling author of action-packed, riveting adventure and crime thrillers. Known for creating resilient, kick-ass female characters and page-turning plots, her love of the genre stems from a lifelong addiction to reading spy novels, action/adventure stories, and thrillers.”

This is book 11 in author D.V Berkom’s Leine Basso thriller series and I’ve read and enjoyed them all.

In some ways I know exactly what to expect to find, which is good. As Ms Berkom’s bio makes clear, her books feature what I’ll call kick-butt females to hopefully dodge any bots looking at language on some internet sites. Leine definitely does that, kicking, shooting, and exploding the specified body part and others when needed. Although Leine has a past that might be a bit unsavory, these days she’s always on the right side, even if what she has to do gets a bit messy at times.

But what gets me every time if the part of the series formula that is unpredictable. While we can assume that the bad guys are going to be involved in human trafficking, since Leine is working for an organization combating that, who they are, where they are operating, and exactly what they’re doing to get the attention of Leine and her cohorts varies each time, but is always engaging. It keeps me on the edge of my seat, wondering what’s gong to happen next every time.

Thanks, BigAl! Glad you enjoyed #11 :-) I'll keep writing 'em as long as you and the readers keep enjoying them.