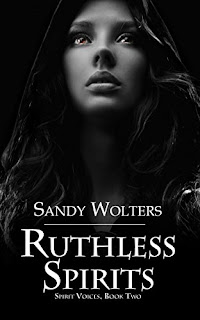 “Terry Anderson’s lifelong dream has come to fruition. Finally his success as an artist affords him the opportunity to purchase the home that has beckoned to him since childhood. What he doesn’t know is, if he moves in, a sinister evil will be unleashed, threatening everything and everyone Terry cares about.

As High Priestess of her Wiccan Coven, Rainy Stratton’s sixth sense has never failed to shed insight on anyone who crosses her path. That is…until she encounters Terry. Intrigued by his eccentric style and humor, she finds herself drawn to him, and despite her misgivings, she eagerly entrusts her heart to the man she can’t read.

When the wicked come out to play, Rainy and Terry face a battle of good versus evil, but she can’t see how it will end. However, the price of losing is unacceptable. For if they do, the devil will claim their souls.”

From Ms. Wolters’ Amazon Author page: “I've been an avid reader for years. To my husband's dismay, I have bookshelves full of books, rooms full of books, boxes full of books. My cars have books in them. I just can't seem to get rid of them after I read them. You just never know when you will want to read it again, right?

About two years ago, my husband gave me the dream gift, a Kindle. It was love at first sight and my first foray into the world of eBooks.  While I still have books everywhere, I no longer take ten or twelve books with me when I go on vacation. The only thing I need is my Kindle. It never leaves my purse.

My genre of choice is romance with a paranormal twist…The women in my books are strong individuals that have moments of weakness and frailty to work through.”

Terry Anderson is an artist who has just purchased the home of his dreams. He, Nathan, and Jody used to walk past this house on their way home from school. There is a building in the backyard which will provide Terry the perfect art studio. As Nathan is helping Terry move in Nathan feels an oppressive presence around the future art studio. However, he is hesitant to mention to Terry that he thinks the place is haunted.

Nathan enlists Jursic to help in the move and assure Nathan that he is right about the state of the studio. The three human men try to battle the supernatural entity as best as they could, to no avail.

Another arc of the story is Jody and Jared’s hand fasting ceremony to be performed by Rainy, a Wiccan High Priestess. Terry is captivated by Rainy and they become quick friends with a promising relationship. Nathan gets his first glance of Bright Flower, the woman who has taken over his dreams.

Terry finds himself in deep trouble for not telling Jody and Rainy the ordeals he has had with the monster inhabiting his house when all he was trying to do was protect them. With all in the open now Rainy gathers a team to confront and battle the demon. Ms. Wolters does an excellent job putting the reader in the middle of the action as they storm the house and battle the demon. The whole book is an emotional rollercoaster ride. Ruthless Spirits is a great addition to the Spirit Voices series, not to be missed.

Ruthless Spirits is book 2 in Ms. Wolters, Spirit Voices Series. There are a number of F-bombs and one hot sex scene that is tastefully written.