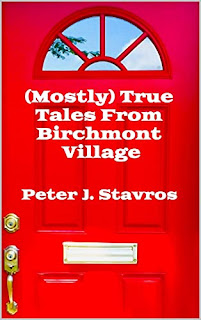 “Based upon his lighthearted short stories that first appeared in The Saturday Evening Post, Peter J. Stavros, with this collection of vignettes, chronicles a year in the lives of these townsfolk as they are faced with one perceived catastrophe and calamity after the other, from the time the Johnsons' house caught fire – and twice in one day! – to the time Chubz, their beloved cat, went missing, to the scramble to fill the position of Santa on the eve of the annual Christmas parade. This generally social lot must also come to grips with an order to shelter in place and stay six feet apart when threatened by a dreadful virus. Yet through it all, the neighbors always find a way to join together to help each other.”

Author Peter J Stavros says that he was aiming for his “own version of Lake Wobegon, with maybe a dash of Mayberry thrown in as well” with this series of stories. Both those fictional places have two things in common.

First, they take place in small towns where everybody knows everyone else, or so it seems. Much like many families, the people of the town have disagreements and issues with each other, but as a general rule they pull together when the situation calls for it, looking out for their neighbors and the community. The people of Birchmont Village show this over and over throughout these stories.

The second commonality these fictional communities have is unique, quirky characters. These range from the newspaper delivery boy who likes to tell you his age to the nearest minute, to the former Eagle Scout and current ranking city councilman who likes to ride around town in a golf cart, to the reigning little league baseball champions whose team members never seem to do anything apart. Most of the townspeople are likeable, but even the one who most people won’t like so much, the guy who is constantly complaining about something, is good for a laugh and for sure will remind you of someone you’ve known.

These two things combine to provide short entertaining and amusing stories. If you’re a fan of Mayberry or Lake Wobegon, odds are you’ll enjoy a visit to Birchmont Village as well.