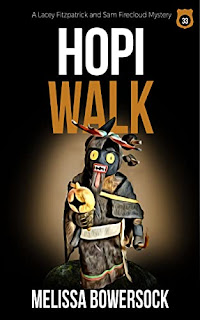 “Navajo police officer John Stoneburner is a tough cookie who hates to rely on anyone else, especially Sam Firecloud with his ‘woo-woo’ abilities. So when John asks Sam to investigate the death of his own brother, Sam knows John is totally out of ideas. The investigation centers on Blue Canyon, a scenic and spiritual area of the Hopi reservation. When Sam walks the location, he not only connects with John’s brother, but also with other enraged spirits that are out for revenge, and that don’t care who they exact it from.”

Although I’ve been aware of them, this was my first time reading one of the books in the Lacey Fitzpatrick and Sam Firecloud mystery series. It was a nice change of pace. They’re likeable characters, as are most of the others in the story (with a few obvious exceptions). The mystery being solved kept me engaged. What sets this series apart from a typical cozy mystery is the settings, often in or near Navajo or, in this case, Hopi, country in northern Arizona with lots of natives playing a role in the story. (Firecloud is a Navajo himself.) There are also a lot of supernatural aspects with Firecloud having the ability to, for lack of a better word, communicate with the spirits of those who are no longer alive. This adds a twist to the story and the approach Sam and Lacey use to get to the bottom of the mystery that makes for a fun, unpredictable read.

This is book 33 of this series. It’s also the first I’ve read. The books can be read as standalones with each installment taking a particular case from start to end.

Getting reviews for a first time author is a difficult process. I used usbookreviews.com to get 100+ reviews for my book at very affordable price. This helped to give a big boost to my book visibility and sales. I also got a complimentary spot in their email newsletter which also helped with sales. So, if you are looking for reviews, would definitely recommend.