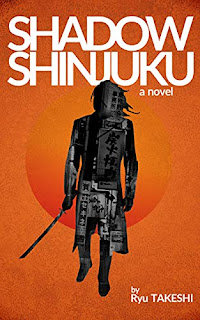 “Ryu Takeshi’s first novel is both a noir crime thriller and urban fantasy. It's a…blend of the imagery of Japanese animation and film…”

Shadow Shinjuku is essentially a manga presented in the format of a novel. While the artwork is missing, readers are given a vivid noir atmosphere to paint their own mental canvas of Tokyo streets.

It also helps one forgive the cartoon bubble dialogue:

‘What are you thinking?’ ‘What am I thinking?’ ‘Yeah, like, what thoughts do you have in your head?

While the physical imagery is strong, I would have liked more Japan flavor in the characters, who come across as U.S. citizens with Japanese names living in Tokyo. Frequent Americanisms jar the ear when they come from Japanese speakers.

“I had to wrap my own head around the fact that I wouldn’t see her again.”

A character “gives the finger” as an insult, a gesture that has no meaning in Japan. Japanese casually use the middle finger instead of the index finger to point. There is nothing equivalent to the “F” word in Japanese, but it is used liberally in the dialogue. At a small exclusive restaurant, the main character praises the sushi rolls, a bit like praising the hot dogs at Delmonico’s.

That said, the characters are a colorful lot, the story is creative and the ending ultimately satisfying. Don’t skip the epilogue.

Bits of graphic sex and lots of strong language