Reprise Review: The Mysterious Case of the Golden Egg by Ernie Lindsey 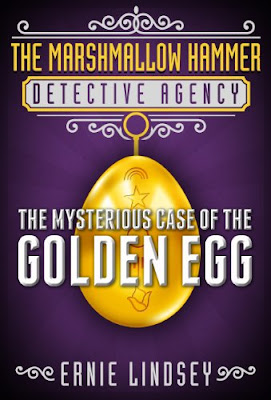 “The sudden and unexpected arrival of a mysterious package interrupts Hat Tintersmoot’s twelfth birthday. Where did it come from? Who left it? Once she discovers that the small cardboard box is a gift from her Grandpa Gordon, the mystery deepens...considering the fact that he passed away three years ago.
The handwritten note reads, ‘Inside this box is an impossible mystery that only the purest of hearts can ever hope to uncover. Solve it, and you will discover the answer to one of the greatest secrets ever.’

It’s another perfect job for the owner of The Marshmallow Hammer Detective Agency. With the help of a new best friend, and her first official employee, Hat must uncover the truth behind five difficult clues in order to find the answer to the greatest secret ever.”

An author of primarily mystery and suspense for adults, Ernie Lindsey has at least ten novels and numerous short stories available. His book Sara’s Game was on the USA Today bestseller list and reached #2 on the Kindle Bestseller list. A native of the Appalachian Mountains of Virginia, Lindsey and his family now make their home in Oregon.

Twelve year-old Halcyone Acasia Tintersmoot, known as “Hat” (her initials and the thing you wear on your head). She has this nickname for the obvious reason that her real name is a mouthful. She’s the owner of “The Marshmallow Hammer Detective Agency.” You won’t find it in the phone book, but it is as real as it gets, at least to Hat. Although this is the first book in the series, Hat mentions other cases she’s worked on and sometimes solved.  “The Case of the Disappearing Toothbrush,” is one. You’ve probably worked a case like that one yourself. “The Mysterious Case of the Cute Boy on the School Bus” is an open case that Hat manages to solve while working on the current case.

When I read and review children’s books, I’ll sometimes draft The Princess, my now eleven year-old granddaughter, to assist. Our process is for her to read a book first, then tell me what she thought, with likes, dislikes, and a letter grade, just like a report card. I’ll then read the book so I can add my impressions while watching for the things The Princess has mentioned. I think The Mysterious Case of the Golden Egg received the most accolades of any book we’ve done this with. Her report to me started with “I liked this a lot” and ended with, “I’d give it a grade of A plus, plus, plus …” I finally told her I got the idea so she’d stop with the pluses.

The mystery to be solved was set up by Hat’s grandfather, who died three years earlier. Before he died, which he knew was coming, he’d arranged for Hat to receive the first clue on her twelfth birthday. Grandpa Gordon was a private detective and liked to talk to Hat about his cases, which was Hat’s inspiration to become a detective. One of the comments The Princess made was that the mystery wasn’t like some, where you found out the solution, and felt cheated that the clues weren’t there to solve it while reading. She felt the clues were tough, but also liked that many of them she was able to figure out. The mystery hit the right balance for the age the book is aimed for. The Princess also thought the book would be fun to read aloud to younger kids and although it would be an easy read for an adult, she thought “even a grownup would like it.”

The Princess was right. I was surprised at how much I liked this book. The clues were fun to try and figure out, and not too easy, even for someone several times older than the target reader. As Hat works her way through the clues she meets and helps several of her Grandpa’s friends (an aspect of the book The Princess also thought important enough to mention) and in doing so learns a lot of life lessons that Grandpa knew he wouldn’t be around to teach her in person. The Princess and I both hope the author continues this series. It’s off to a great start.

Added for Reprise Review: The Mysterious Case of the Golden Egg was the winner in the Children's/Middle Grade category for B&P 2015 Readers' Choice Awards. Original review ran September 23, 2014.

Reviewed by: BigAl with input from The Princess