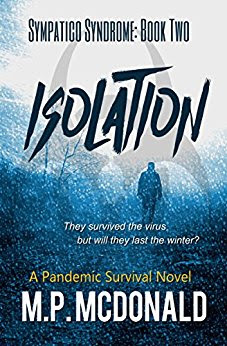 “Cole Evans thought he'd found a safe haven for his family and a growing band of survivors of the most lethal virus the world has ever known. But he finds continued survival is far from guaranteed as they battle hostile encounters with other survivors, nature, and devastating accidents. Are they prepared to survive their first brutal Wisconsin winter after the rest of the world has perished?”

“M.P. McDonald makes a living from taking your breath away... then giving it back via a tube or two. She lives in a frozen land full of ice, snow, and abominable snowmen. On the days that she's not taking her car ice-skating, she sits huddled over a chilly computer, tapping out the story of a camera that can see the future. She hopes it can see summer approaching, too.”

The premise of this series is a virus that wiped out many, maybe most, of the world’s population. This band of survivors believe they’ve outlasted the virus although they still take precautions in many situations. In this second volume of the series they’ve survived the initial problems and are trying to figure out the long term.

I found the world they’re living in, the premise, and the things they have to work out an interesting mind exercise to go through with them. Of course, there is much more than planning involved as accidents happen, plus other survivors pop up from time to time and it isn’t clear who is friend and who foe. Not to mention the issues involved in a Wisconsin winter. I’m looking forward to the next in the series to see where things go from here.

While the second book in the series, this can be read as a standalone and still understood. (I haven’t read the first in the series and it was not a problem.)

The review is based on a pre-release beta copy of the book, so I can’t judge the final product in this area.