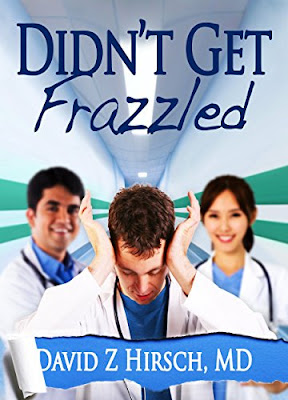 “Medical student Seth Levine faces escalating stress and gallows humor as he struggles with the collapse of his romantic relationships and all preconceived notions of what it means to be a doctor. It doesn’t take long before he realizes not getting frazzled is the least of his problems.

Seth encounters a student so arrogant he boasts that he’ll eat any cadaver part he can’t name, an instructor so dedicated she tests the student’s ability to perform a gynecological exam on herself, and a woman so captivating that Seth will do whatever it takes to make her laugh, including regale her with a story about a diagnostic squabble over an erection.

Didn’t Get Frazzled captures with distressing accuracy the gauntlet idealistic college grads must face to secure an MD and, against the odds, come out of it a better human being.”

“David Z Hirsch grew up on the steppes of Nebraska peddling Kool-Aid off I-129 until saving up enough cash for medical school. After graduation, he moved to Pyongyang to teach pre-med classes at Kim Il-sung University. He soon fell out of favor and was imprisoned at Kaechon where he traded medical favors for soup and toilet paper until he made a daring escape across the border.

Dr. Hirsch subsisted for the next three years by foraging gooseberries and licking the dew off spiny toads. This led to a burst of creativity, and he wrote the first draft of Didn’t Get Frazzled on bark peeled off a dying Manchurian Ash tree. Ultimately discovered in a semi-feral state by the China Coast Guard flotilla from Liaoning, Dr. Hirsch returned to the United States sixty pounds lighter but more inspired than ever.

David Z Hirsch is a pen name, so absolutely nothing in the above paragraphs are true. This is not lying, you see. It’s fiction. Many well-regarded sources insist that these are two distinct things. The actual guy who wrote this novel is a practicing physician in Maryland. His life story is considerably more prosaic, but in his head he lives a fascinating, fascinating life.”

Although the author’s name is fictional, this story was written by an M.D., which leads to some medical terms that left me somewhat cross-eyed. However, the authenticity of the main character's experience as he stumbles through medical school, made the Latin inconsequential.

Be warned, if you buy this book and read it in a public place, you may well embarrass yourself by laughing aloud. Well, the laughter might not cause you a red face, but if you have to explain what is so funny--good luck with that!

Along with light-hearted humor where the reader is laughing along with the main character and not at others, the author includes a smattering of well-considered social commentary on what exactly makes a good doctor. He educated me on the tremendous stresses endured not just by medical students, but also by those already qualified doctors who are expected to teach as well as perform their onerous duties on a hospital ward. For Seth, the stress extends beyond the hospital wards and stretches his personal relationships to breaking point.

In summary, this is a terrific read. For a doctor, the author’s writing is beautifully clear and accessible--see what I did there? At 99 cents on Kindle, this is a bargain you shouldn’t miss.

A few typos, but not enough to irritate.

Email ThisBlogThis!Share to TwitterShare to FacebookShare to Pinterest
Labels: 5 Star