Review: With the Right Enemies by Rob Pierce 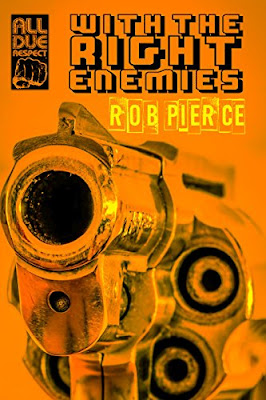 “Vollmer’s a young guy, grows up on ugly streets. He survives by being uglier, hurting people for money, hurting people because he likes hurting people. When he’s hired to track down Dust and bring back the money he stole, keeping Dust alive isn’t a priority. Neither is keeping anyone else alive, even people he loves. Vollmer’s killed people he loves before. With The Right Enemies is the bullet-drenched follow-up to Uncle Dust, Rob Pierce’s acclaimed debut novel about a bank robber’s disastrous fling with domestic life.”

Mickey Spillane fans will not be disappointed. With the Right Enemies is a stylistically adept dark tale with clipped narrative, gritty dialog, and plenty of psychopaths.

The action races through California’s Bay Area cities of Berkley and Oakland.

“Oakland was bloody. Nothing unusual there, but Berkeley was bloody too. The towns were side by side and there was violence in both, but Berkeley was a university town, the focus was on the achievements of the educated masses, not the occasional shootings in bad neighborhoods. In Oakland, every minute was a possible occasion.”

Pierce depicts the locale with authority and creates a chilling bunch of characters that could have been lifted straight from police blotters.

My only complaint is that the story is not quite a complete tale. It is a sequel to Uncle Dust and apparently a prequel to another installment in a sort of Perils of Pauline serial. Except for the people who are killed, events do not affect the characters. They are the same at the conclusion as they are coming.

While it’s a ripping narrative as far as it goes, it doesn’t have the psychological tension of Raymond Chandler or the genre’s greatest wacko, Jim Thompson. I say that only out of respect for Pierce’s obvious talent and the expectation he can move to a higher level.

This is a hard-boiled crime novel. If you’re sensitive to language and such, this isn’t your thing to begin with, right?