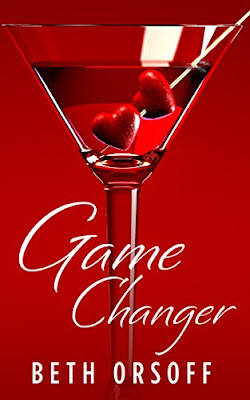 “When it comes to relationships Samantha Haller has seen it all. As a top LA divorce attorney she knows love doesn’t last. On a rare night out at a Hollywood nightclub she isn’t looking for love, or even a relationship, but with the help of a spiked drink she may just let loose and have some fun for a change.
For sports agent extraordinaire Jake Jensen dating means sex, nothing more. That’s why his ‘relationships’ last, on average, two weeks. As long as the women go away quietly and don’t make a scene, he’s fine with that. Finding a new one to take the former’s place is never a problem for a handsome, generous, eligible bachelor.

They both want sex with no attachment — what could possibly go wrong? They could fall in love . . .”

An entertainment attorney based in Los Angeles, Beth Orsoff writes humorous chick-lit with six previous books to her credit. She continues to deny (despite mounting evidence to the contrary) that her book Romantically Challenged is a memoir.

Budding relationships provide a treasure trove of possibility for books of all kinds, especially in humorous chick-lit. Miscommunication (or lack of communication) almost always plays some role, just like in real life. That Jake and Samantha both want the same thing, something negotiated thousands of times in only a few hours every Friday night in singles bars everywhere, adds to the humor. Of course, sometimes that real people, just like these characters, don’t always know what they want, doesn’t help. A fun story with great characters.