Review: All Out For Grinder's Switch by Trevor Judd 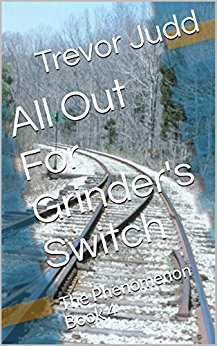 “While investigating a nearby entropic zone, Professor Henry Kelvin stumbles upon Grinder's Switch, a small, idyllic town which only appears for three days every ten years. But life in Grinder's Switch is not as tranquil as it first seems. The townsfolk are forced to participate in a lottery as a means of population control, and Kelvin's budding romance with the town's mayor, Pearl Jessup, sets off a chain of events that ultimately forces him to choose between staying with the woman he loves or returning to his life.”

The premise, a town which is largely trapped in the past and exists in what I’ll describe as another dimension most of the time, is an interesting one. Their limited resources mean they have to control the population, which they do by means of a lottery. If a baby is born, the lottery “winner” gets to die. Throw in a protagonist who stumbles on the town during the short period it is accessible to those from our dimension, have him and the town’s mayor fall in love, and you’ve got the makings of a short, entertaining read. What would you do?